Lead Me On by Victoria Dahl 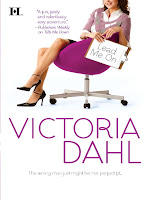 …is a big red flag to prim and proper office manager Jane Morgan. After a rough childhood with a mother who liked her men in prison-jumpsuit orange, Jane changed her name, her look and her taste for bad boys. So why is she lusting for William Chase with his tattoo-covered biceps and steel-toed boots? The man blows things up for a living!

She gives herself one explosive, fantasy-filled night with Chase. The next day it's back to plain Jane and safe men.

But when her beloved brother becomes a murder suspect, it's Chase who comes to her rescue. And Jane discovers that a man who's been around the block knows a thing or two about uncovering the truth….

This is the third and final book in Victoria Dahl's Tumble Creek series and like others have told me it's the best (with Start Me Up coming in a close second for me)!

Just like the other two books in the series this book takes a closer look at Quinn's secretary/office manager/receptionist/part owner Jane that we are introduced to in Start Me Up. And there is a lot more to Jane than her prim and proper outward appearance. Turns out Jane isn't proud of her wild past or her family that is still a bit on the wild side. I really enjoyed seeing Jane try and be the truest version of herself throughout the book with the help of Chase.

Chase... so kind and sweet and so tattooed. I love how he had a few secrets of his own, good and bad that he reveals to Jane as their relationship progresses. And they were so good together helping each other and each others families. But of course Jane doesn't think Chase is the right kind of man for her, he reminds her too much of her past she's trying to keep under lock and key.

And also like the other two books this one had a bit of a mystery involving Jane's brother and a possible murder. I really liked that the author kept this mystery element alive through all 3 books. And I especially like that Jane can sure handle herself in a fight, with boxing! Go Jane!

Overall definitely a Victoria Dahl fangirl and I can't wait for her next book!

Lead Me On was released January 1st 2010
Genre: Contemporary Romance
4/5 Stars
Review copy from Amazon Vine
Posted by Alea at 6:00 AM