The Grift by Debra Ginsberg 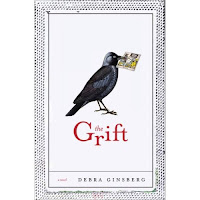 Amazon.com Product Description:
What happens when a pseudo psychic suddenly gets the real gift?
Marina Marks has been on the grift as a psychic since she was a child, forced into the business by a junkie mother who was always desperate for her next fix—and willing to use her solemn dark-haired daughter to peddle an extra buck. As an adult, Marina has earned a handsome living preying on the dreams and fears of her clients. She doesn’t believe there is such a thing as psychic ability, but she does believe in intuition. Her gift is the ability to gain the trust of her clients and subtly raise her fees as they become more attached to her and her readings.

But when Marina moves her “intuitive counseling” business out of muggy, cloying Florida to the milder environs of southern California, her past follows her. As she takes on new clients—a trophy wife desperate to bear a child, a gay man involved with a closeted psychiatrist, and a philandering businessman who’s smitten with her—a former client resurfaces in an eerie way. Suddenly, Marina is in love for the first time, but it is a romance whose roots lie deep in her past and threaten her efforts to reinvent herself.

As Marina’s life gets more and more entangled with those of her clients, she makes a startling discovery: she suddenly has the actual ability to see the future. After predicting a murder exactly as it happens, she becomes the sole suspect. Now she’s the desperate one—desperate to clear her name and to discover the meaning behind her visions.
I'm not totally certain how I feel about this book. I liked it but at the same time I felt sort indifferent. I found the story so so serious that it almost became stressful. I would have liked some lighter elements or a bit of humor to counterbalance all the seriousness and all the character's flaws and drama.
Of all the characters and relationships I think I liked Marina and the mysterious Gideon's relationship the most. I would have loved to see that explored even more than it was. I'm very glad that Marina was the main character because she is who I enjoyed the most. It was really interesting to see her change over the course of the book. Besides her and Gideon, I didn't really care for any of the other characters. Cooper was ok, but even he got annoying after awhile.
I thought one really strong thing the book had was the alternating perspectives. It helped keep up the mystery of the story with all the perspectives layered on top of each other. I really like how all the elements of the story slowly came together piece by piece. I also liked learning a bit about psychics and tarot cards. I don't know much about them so it was an interesting subject to read about!
I recently heard about one of the author's other books, Blind Submission, I'm very interested in reading it!
3/5 Stars
Review copy provided by publisher
If you've read this book, what did you think of it?
Posted by Alea at 6:00 AM