The Brightest Moon of the Century by Christopher Meeks 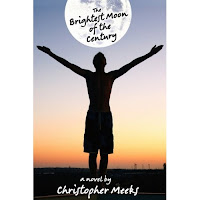 In Christopher Meeks's "The Brightest Moon of the Century," Edward, a young Minnesotan, is blessed with an abundance of "experience"-first when his mother dies and next when his father, an encyclopedia salesman, shoehorns Edward into a private boys school where he's tortured and groomed. Edward needs a place in the universe, but he wants an understanding of women. He stumbles into romance in high school, careens through dorm life in college, whirls into a tornado of love problems as a mini-mart owner in a trailer park in Alabama, and aims for a film career in Los Angeles. Will his love for a Latina prove to be the one? In nine chapters, the reader experiences Edward's life from ages 14 to 45. This is the first novel from Christopher Meeks, which follows his highly acclaimed collections of short stories, "The Middle-Aged Man and the Sea" and "Months and Seasons." Author and humorist Sandra Tsing Loh has said, "Christopher Meeks's quirky stories are lyrical and wonderfully human. Enjoy." Carmela Ciuraru wrote in the Los Angeles Times Book Review of Meeks's first book, "This idea resonates throughout the collection: Meeks's characters seek happiness in the small things because they have no choice ... [The stories] are poignant and wise, sympathetic to the everyday struggles these characters face."

The Brightest Moon of the Century is one of my favorite kinds of stories, it explores a large portion of one person's life, you get to see how they grow and change and the experiences that make them who they are. It's put together basically as 9 short stories from Edward's life. His teenage years to mid-adulthood. We're there for it all!

I loved all the stories, from Edward's time at a private high school to his college girlfriend to his time owning a trailer park mini-mart to his time as a film student. It was all interesting and strongly written. I couldn't pick a favorite section, it all built on itself to create a great character study! The things that he did and happened to him seemed so unique to his life, it read basically as a biography.

Another thing I really liked was that several times, characters from one part of Edward's life made a reappearance later on in the story, tying the story that much closer together. Another unique touch to an already unique story is a collection of photography that helps set the scenery for specific parts of the story. I loved that!

This book is a real gem, it's engaging and original! I loved it!

The Brightest Moon of the Century was released on March 7th.

4/5 Stars
ARC received from author
Posted by Alea at 6:00 AM