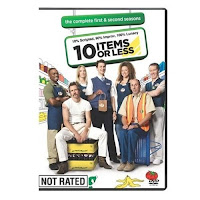 When he inherits his father's family-owned grocery store, Greens & Grains, young Leslie Pool's (Lehr) hands-on, open communication approach to store management soon alienates him from his misfit employees. Despite Pool's determination to prove he can do things his own way, chaos ensues, spawning a comedy of errors with a host of quick-witted characters and their outrageous relationships.

Ok, this show is HILARIOUS! I never used to like sitcoms but now they are some of my favorite shows and this one is no exception. About 95% of the show takes place in a grocery store between the employees and manager. I don't know what to say besides it's really funny!

This program is really original for a few reasons. According to the special features all the dialogue is improvised. The plot isn't but the dialogue is! And it's hilarious! Also, when the actors came in to audition for the show they didn't really know what it was, some of them assumed it was a reality show. So they walk in and are handed a job application for a grocery store to fill out, and turns out that's how their characters were created, off of that job application!

I loved all the characters and actors they all bring something hilarious to the show. From the overly friendly but sort of unrealistic manager, to the awkward stock boy, to the manager of the rival big box grocery store. These people riff off each other so well!

The seasons are very short, each fitting on one dvd packaged together for purchase. It's just funny stuff!