BLOG TOUR: It's Not You, It's Me by Kerry Cohen Hoffmann

Welcome to the next Traveling to Teens book blog tour! Created by the lovely Yan and lovely Carol! Today I'm excited to welcome Kerry Cohen Hoffman author of It's Not You, It's Me! 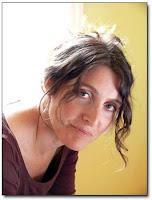 Kerry Cohen received an MFA in creative writing from the University of Oregon and an MA in counseling psychology from Pacific University. A practicing psychotherapist and the author of the young adult novel Easy, she lives with her husband and two sons in Portland, Oregon.

Funny and touching—this is a heartfelt breakup story. Zoe loves Henry. Henry dumps Zoe. Zoe wants Henry back—at any cost. Zoe’s two best friends come up with a plan to help Zoe get what she thinks she wants. The plan: make Henry jealous. But the plan takes a surprising turn. . . . Spanning thirty-one days in the cycle of a breakup, Kerry Cohen Hoffmann’s humorous and poignant novel depicts a girl whose single-minded focus on her ex-boyfriend has pulled her far from the person she most needs to win back—herself.

Like many have said the character of Zoe comes off as a nut, basically sabotaging any chance she has of getting her ex-boyfriend back with her antics. Everyone tells her just leave it be, don't do that, don't say that, but she does it anyways without much thought. Even though she comes off as kind of crazy I feel like it depicts a bit of what any normal girlfriend might go through when she breaks up with the boy that really counts and this can be seen sort of as a cautionary tale. It sheds a bit of light on the ugly truth of breakup and the feelings that people might have (that they definitely should not act on.)

While Zoe was harder to swallow I rather liked the guys in the book. From Henry and his bandmate Niles to Sam, her friend that makes no secret of his crush on Zoe. They all seemed a lot more level-headed and also really seemed to care for Zoe even when she was acting crazy. I also liked Zoe's friends Julia and Shannon they tried to keep her on the right path for as long as they could and when that wasn't working that finally gave in and fed the craziness of Zoe and her plan.

The ending was a little meh but I think it was an appropriate ending for the message that I thought the author was trying to send. I really like how she and some of the characters stress that no matter who you are with, you need to maintain yourself and your own interests instead of losing yourself within someone else. I think that's a very important message that everyone needs to be reminded of from time to time.

Overall an interesting concept with probably a truer to life (but exaggerated) main character than we all want to admit to!

It's Not You, It's Me was released on June 9th!

And here's an interview with Kerry Cohen Hoffman!
1. It’s Not You, It’s Me spans 31 days exactly, did it involve more planning than a normal book?

Well, it definitely took some revising. The 31 days thing wasn't my original plan - that just came into shape over time. All I knew was that I wanted a book about a break up - the unbearable pain, the fact that there's really no way to quell it, and the fact that most all of us can do immensely dumb things in the course of those feelings. When I came to the 31 days idea it just seemed so perfect. The days inch by when you're going through a break-up, don't they?
2. What is your favorite thing about writing for teens?

I love the freedom it affords. Adults are so judgmental. (There, I said it!) Teens aren't like that, despite the stereotype. They still have that childlike sense of wonder, and yet it's combined with an intelligence and maturity you won't find in younger kids. I really connect to teenagers and get along well with them.

3. What is one book from your teen years that had a strong impact on you?

The one that made me first want to be a writer was The Heart is a Lonely Hunter (long before Oprah was praising it, mind you.) That book was the first one I read that artfully spoke of the loneliness of a young girl - something I could relate to. More than that, I was hungry for it, hungry to see myself reflected somewhere, hungry to know I wasn't alone. This idea - that reading a book can make you feel connected and less alone - became the impetus for everything I've written since.
4. What is the main different for you between writing fiction and writing a memoir. Do you prefer one over the other?

I do. I prefer memoir writing because I'm in love with the idea that our lives matter, that narrative can save us. I'm endlessly fascinated, too, with the question of what is true, what is real. So the main difference is that with fiction I have to make up the narrative. Of course my fiction is inspired to some extent by my real experiences, but none of it is factual to my life. This is why I prefer memoir, too: I don't have a strong enough imagination!
5. Do you have any plans to write another memoir or possibly fiction for adults?

I have actually written another memoir which we're trying to sell. I also have another memoir proposal underway. And then I have yet another memoir idea. (My mother says, "Exactly how many memoirs can a 30-something person have?" I guess we'll find out.) I have no plans right now for adult fiction. I think I feel too intimidated by that adult judgment I was speaking about to believe I could do it.
Posted by Alea at 6:00 AM