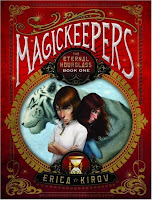 What would you do for an hourglass that stopped time?

Nick Rostov's father is the worst stage magician in Las Vegas. He can barely pull a rabbit out of a hat. So it is a strange morning indeed when Nick wakes up to find himself on the top floor of the Winter Palace Casino with a promise from the greatest magician in the world to teach him magic.

And not just stage magic. Real magic. Nick sets out to learn about his mother's family, the strange Russian clan of magicians that secretly run the Winter Palace. But there is a catch: Nick has the sight, the ability to see into the past. And so it must fall to him, with only his cousin Isabella to help, to pick up the long-buried clues and unravel the mystery of The Eternal Hourglass, the only magic artifact ever created that can actually stop time.

I thought the Eternal Hourglass was a great set up for a series. Right away, main character Nick is plucked out of the life he knows with his father and grandfather and placed in this large Russian family that lives and works within the Winter Palace in Las Vegas. They are the relatives of his mother and they are all magicians! I felt sort of bad for Nick's dad who also worked as a magician at another nearby hotel but he's not very good at what he does. I did really like seeing how this family operates though. I especially liked Nick's cousin Isabella and her white tiger Sascha. I like the idea of animals that we would normally fear being part of this family!

What I thought was really clever is that the author takes pieces of history and melds them into this book thus getting readers interested in finding out more about these pieces of history. It was interesting to see how these flashbacks related to the present storyline. I also liked Nick's lessons from learning how to use a crystal ball to switching out Isabella for Sascha those were some great parts of the story for me!

I think the story will work best for younger teens and older children but I still had a great time reading it. It will be interesting to see what other kinds of adventures Nick gets into with his new family. I sure hope he still gets to see his dad and grandpa!

Magickeepers: The Eternal Hourglass was released on May 1st 2009.