Today I got to sleep a bit later (thank god) Oh shoot I waited to long and my memory is started to get fuzzy! I'm pretty sure I met up with Gail and we looked around. Oh yes, we went to the Bloomsbury booth and also stopped by the Hachette booth, where the large chained up bin of "banned books" was finally open. It turns out the banned book was a new YA book by James Patterson called Witch and Wizard, great marketing I say! After roaming around for a bit we headed over to the Firebrand/Netgalley booth for my 10am Blogger "Signing" slot. Here are a few pictures. 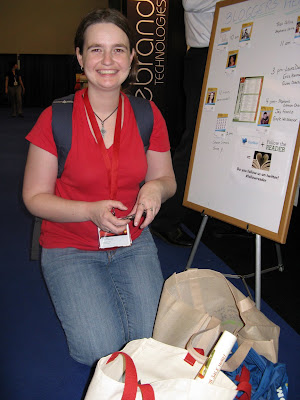 Here's Gail taking a quick breather at the booth, she had a lot to carry! 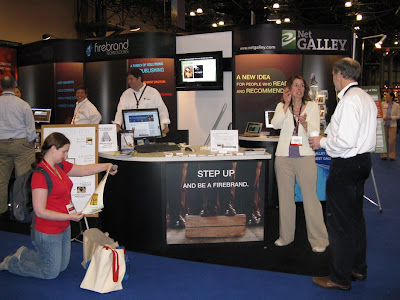 Over to the right is Dawn one of my buddies for the hour at the booth talking to Fran who we have to thank for setting this all up! 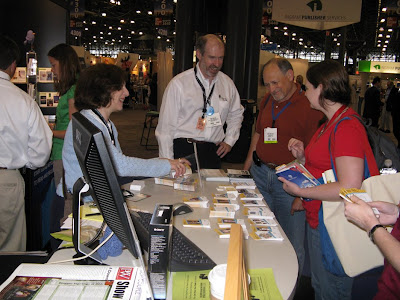 To the left we have Candace of Beth Fish Reads who was my other partner in crime for the hour! 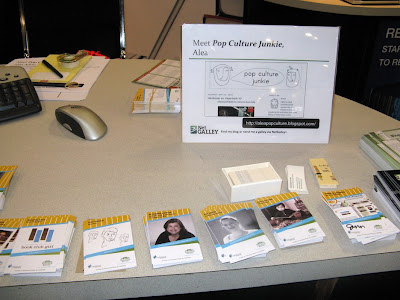 Here's the table with some of the awesome trading cards and also a little sign showcasing my blog! 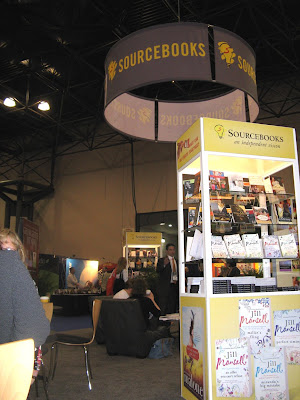 Directly across from the booth was Sourcebooks!

I had a lovely time at the Blogger "Signing" Booth chatting with fellow bloggers and also a few very sweet people that came over and said Hi to me, it was very nice chatting with you guys!

Here are some more highlights and of course a picture or two! 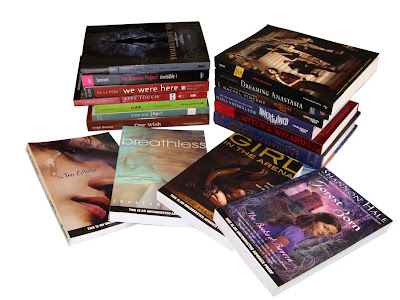 Meeting Matt de la Pena and also meeting both Rachel Vincent and Gena Showalter at the Harlequin booth, anyone else super excited for the new Harlequin Teen line of books???

Gail getting me a signed copy of Another Faust because I got stuck upstairs. Thank you Gail! 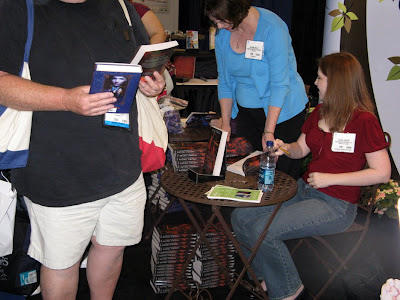 Meeting Melissa Marr who gave me tips on taming curly hair and also Rachel Vincent again! Rachel is in the red, and Melissa was behind the lady in blue lol!

Listening to the Consumer Panel: Teens Sound Off... one of the moderators looked awfully familiar :P

Walking into the extremely crowded (yay!) room for the Book Bloggers panel!

Meeting Leigh Brescia, Sara Zarr, and Justine Larbalestier and talking about their covers of course!

At the end of the day Gail and I really wanted to sit down so we got something from Starbucks and took a seat! Once BEA came to a close that day I headed back to the hotel to lay around. I think I may have taken a nap, can't remember! I know I had Burger King for dinner, how horrible am I! It was around the corner!

Then it was time for the Geektastic Party at Lucky Strike Lanes! I went to meet Amy at her hotel and we headed over! Gail, Bethany, Laura, and Sharon were already there chilling on a couch! And we found Lenore later on! Now here's my problem, for me to talk to a complete or almost complete stranger I have to know something about them to bring up. So a ton of people I didn't know there so I sort of hid on the couch, but it wasn't just me! Some wonderful authors came over and chatted with us including Barry Lyga, Scott Westerfeld, Holly Black, Elizabeth Scott, and Sara Zarr. I bet you wouldn't be surprised to find out I talked to a few of them about their book covers LOL!

I took next to no pictures, I'll blame it on being exhausted! Anyhow it was a lot of fun! Sadly this was the last time I saw Amy and Lenore as they weren't going to be at BEA the next day, they were nice enough to walk me back to my hotel when the cranky cab driver didn't want to take me over there! 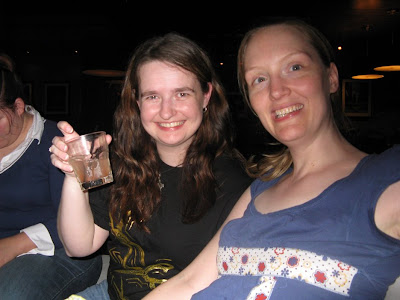 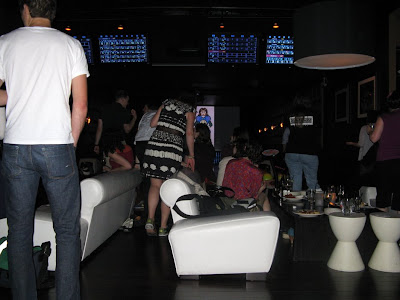