This Week In Books Or My Greatest Book Discovery! 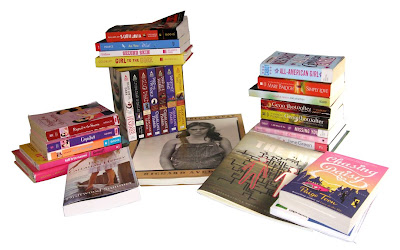 Yay! Was so excited when this came. It's so tiny and cute. *pets* I just hate that stupid True Blood graphic, it is ugly :/

So I got these at the $2 bag sale at the library. Notice, that's not a grocery bags worth of books, can you believe it! Even the lady that checked me out asked, "You're not going for the bag?" I wanted to scream, "Don't tempt me lady!!!!" Anyhow, I've had the first book in the Pretty Little Liars series for years, why haven't I read it? What's wrong with me!

These came for review, and specifically As You Wish for the Traveling to Teens tour!

Ballads of Surburbia by Stephanie Kuehnert

For a Traveling to Teens tour in July!

So these were from my local library's sale. I'll probably be going back a few more times, they only do a sale once a year so gotta get in there a few times! I'm totally unsure if I will like the Gena Showalter books, I met her at BEA so I figured why not. And her YA book sounds interesting, has anyone read this series?

These two came for review, not really sure what to think of that second one.

So I went to Borders to see their big Dollar Sale even though everyone said it was crap, which it was. I also brought my camera to see if the display with the two books I worked on was still up, but nope that's where the stupid Dollar Sale was :/ Anyhow I browsed around and left with that book, I had never heard of it but it sounds really interesting! Has anyone read Driftwood Summer, did you enjoy it?

So went back to the library sale, and brought my sister. I found small pile of art books didn't see anything I liked so I moved on. 5 minutes later I walked by that table again and what was sitting right on top but In The American West by Richard Avedon, and then I opened it up and it was SIGNED! I almost died! Who cares if it's falling apart, I sure don't! My greatest book discovery ever!

The End by Anders Nilsen

This came from Bookmooch, was very excited because I'm not sure if this is in print anymore!
Posted by Alea at 2:07 PM