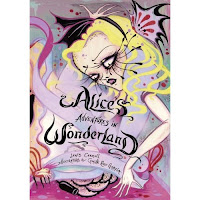 This edition of Alice′s Adventures in Wonderland by Lewis Carroll, one of the most popular works of children′s literature of all time, follows in the track of a recent successful Collins Design title: The Curious Case of Benjamin Button by F. Scott Fitzgerald, illustrated by Calef Brown and published in sync with the release of David Fincher′s film starring Cate Blanchett and Brad Pitt.

This new edition of Carroll′s cult classic, designed in a compelling package and priced affordably, will publish in sync with the release of one of 2010′s major Hollywood films. According to Variety, Tim Burton′s forthcoming movie is generating a lot of buzz as one of the year′s biggest. And it′s got an all-star cast to draw in audiences and position our book nicely in the market: Johnny Depp (Mad Hatter), Alan Rickman (Caterpillar), Helena Bonham-Carter (Red Queen), Anne Hathaway (White Queen), Michael Sheen (White Rabbit), Crispin Glover (Knave of Hearts) and Australian actress Mia Wasikoska (Alice).

The style of Camille Rose Garcia′s work has a dark yet Disneyesque sensibility that strongly recalls Burton′s aesthetic, so book buyers and readers will both readily make that visual connection, which should help both buy-in and sell-through.

Think Alice goes Goth, and you′ve got the magic of this special book.

I have Rebecca to thank for pointing out this book! I've really been into Camille Rose Garcia's artwork the last few years and had been meaning to buy one of her book and this is going to be the first one for sure! I've already pre-ordered it. It's going to be amazing, no doubt about it!
What can't you wait for to be released?
"Waiting On" Wednesday is hosted by Jill at Breaking the Spine!
Posted by Alea at 6:00 AM