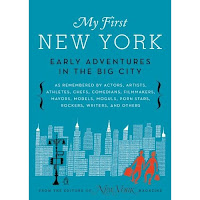 My First New York: Early Adventures In The Big City

Released March 23rd 2010
It sounds like this book was written for me, enough said. I will be buying it in Hardcover which is a rare rare thing for me to say!
What can't you wait for to be released?
"Waiting On" Wednesday is hosted by Jill at Breaking the Spine!
Posted by Alea at 6:00 AM