This Week In Books Or The Week I Got A Nook! 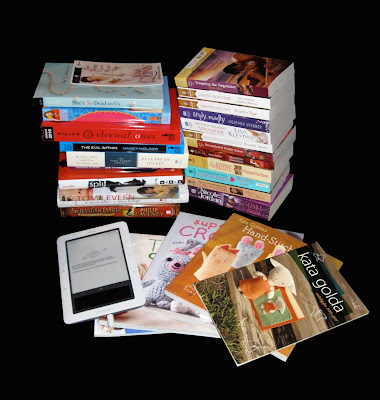 Oh my! For review and completely by surprise!

Local used bookstore, it has so many romance novels and of course I had taken my list out of my purse after carrying it around for weeks! I was overwhelmed I could only buy 2 after looking for like half an hour!

For review, Party from Amazon Vine.

A Secret Affair is from Amazon Vine and Hand-Stitched Felt is from two very sweet and extremely thoughtful Bookfairies by the initials of G and M. They even met the author and had her personalize it for me. TALK ABOUT DARN SWEET!

Get ready, I've got a story for this one. As some of you know I've been slowly getting better at crochet with the goal of amigurumi, I've gotten a lot better the past two weeks so I thought I was ready for something a little harder and cuter. Local stores didn't have this one, but one by my work did (apparently) left early, practically rolled around on the store floor trying to find it, an employee helped me and turned out it wasn't there. *cue sad face* Went back onto the Borders website to see what other stores in the area had it and it said my local store had it, but they didn't have it 12 hours before. I called and they pulled it off the truck for me, talk about good karma man! Story over!

Ten Things I Love About You by Julia Quinn
Sebastian Darke: Prince of Explorers by Philip Caveney

Went to Walmart where I apparently lost consciousness and bought these books, what?! You don't believe me!?

A number of things made now the right time for me to get an e-reader and of the Kindle, Nook, and Sony e-readers I liked the nook the best. Haven't played with it much, still trying to charge it. But I'm hoping to get it figured out soon! E-reader users, I'd love tips of where you like to buy e-books besides platform specific stores!

Saw this the last time I was at the Barnes and Noble with the used section, but then I didn't know anything about crochet, so I grabbed it this time!

She's So Dead to Us by Kieran Scott