Pop Culture Junkie on the Nook 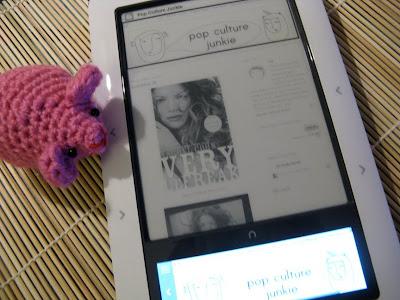 Today there was a pretty major update for the Nook including the addition of games (suduko!! and chess) and a beta web browser! Apparently some of the nuts and bolts of battery life and page turning have also been fixed. So I stopped over at Barnes and Noble, hooked up to their wi-fi with the help of a bookseller and tada! Even checked my email and sent one as well, all on my nook! I never even considered the fact that the Nook would eventually do something like that but it's a wonderful update and surprise! And Pop Culture Junkie looks pretty awesome on there, I've always been a fan of black and white! You can zoom in and out and you control it via the touch pad (and also see the webpage in color).
Posted by Alea at 10:37 PM