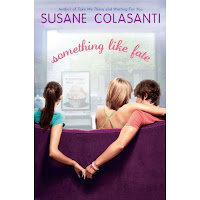 
Best friends Lani and Erin couldn’t be more different. Lani’s reserved and thoughtful; Erin’s bubbly and outgoing. Lani likes to do her own thing; Erin prefers an entourage. There’s no possible way they could be interested in the same guy.

So when Erin starts dating Jason, Lani can’t believe she feels such a deep connection with him—and it may be mutual. The more Lani fights it, the more certain she feels that it’s her fate to be with Jason. But what do you do when the love of your life is the one person you can’t have?

I rather enjoyed Colasanti's previous release Waiting For You and was excited to read another book from her. But it's hard to not compare it to Elizabeth Scott's The Unwritten Rule which was also recently released which explores a similar subject. But I'll try not to talk about that much here as to not detract from Something Like Fate. But if you liked one of these titles I'd definitely suggest trying the other to get another take on the subject.

My favorite part of Something Like Fate was Lani and Jason finding their connection and I really believe stuff like this happens for people, it's fate and you can't deny it I don't think. I love the theme of fate in this book. Every time they would get together as a group with Erin and Blake, Lani would notice more and more she had in common with Jason but tried to push it aside since he was with Erin. It was not an option for a long time until she realized this might be her chance at something amazing.

I would have liked to have gotten to know Erin a bit more because then I would have felt the emotional stress that Lani was feeling because from where I was standing Erin had no business in a relationship that was made for Lani and Jason. I also would have liked to get to know more about Lani not in relation to Jason, for example I really liked her relationship with her friend Blake, great subplot.

One nitpicky thing I will point out was the use of things such as "And then I was like" or "Then he was like". I know that people do speak like that, I do, but it did start to get on my nerves after a few uses.

Genre: Young Adult
3.5/5 Stars
ARC provided by publisher
Posted by Alea at 6:00 AM