Blog Tour: One Dance with a Duke by Tessa Dare 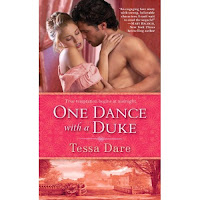 Welcome to the first of three blog tour stops for the Tessa Dare Stud Club Trilogy, check back for the final 2 later this summer! Today I have a guest post from the author, review, and a giveaway for the entire trilogy later this afternoon!

Here's a bit about the book:

In One Dance with a Duke—the first novel in Tessa Dare’s delightful new trilogy—secrets and scandals tempt the irresistible rogues of the Stud Club to gamble everything for love.

A handsome and reclusive horse breeder, Spencer Dumarque, the fourth Duke of Morland, is a member of the exclusive Stud Club, an organization so select it has only ten members—yet membership is attainable to anyone with luck. And Spencer has plenty of it, along with an obsession with a prize horse, a dark secret, and, now, a reputation as the dashing “Duke of Midnight.” Each evening he selects one lady for a breathtaking midnight waltz. But none of the women catch his interest, and nobody ever bests the duke—until Lady Amelia d’Orsay tries her luck.

In a moment of desperation, the unconventional beauty claims the duke’s dance and unwittingly steals his heart. When Amelia demands that Spencer forgive her scapegrace brother’s debts, she never imagines that her game of wits and words will lead to breathless passion and a steamy proposal. Still, Spencer is a man of mystery, perhaps connected to the shocking murder of the Stud Club’s founder. Will Amelia lose her heart in this reckless wager or win everlasting love?

Let's start with a guest post from the author!

There’s a phrase I’d like to banish. Okay, not banish – because I really don’t believe in banishing phrases. But let’s just say, I wish I didn’t hear it quite so often. It’s this one:

A lot of romance readers use this phrase. I’ve heard endless variations on “Romance novels are my guilty pleasure.” In fact, I’m relatively sure I’ve said it before myself, but only lately has it started to make me cringe.

I get the “pleasure” part of it. Romances are fun, entertaining, enjoyable. For those who love the genre, a great romance is pure reading joy. But why the “guilty”? Is romance supposed to be like potato chips or chocolate--detrimental to our health if we consume too much?
I suspect the “guilty” factor has more to do with time. Unlike eating, or even watching television, reading demands our focused attention. It’s hard (but not impossible!) to multitask while reading a book. Reading time is time we take exclusively for ourselves. Romance readers are mostly women, and women have busy lives. If you’re a doctor, mother, teacher—or all three—with a lot of people demanding your attention, it can be hard to carve that “me-time” out of the day.
Amelia, the heroine of One Dance with a Duke, struggles with this. As the only woman in a family of five brothers, she finds herself always tending to their needs, putting others first. It’s a dilemma with which I can readily sympathize, after making my fifteenth PB&J of the week, meticulously removing all evidence of crust so it can pass preschooler muster.
But that’s exactly why I think we should strive to filter the term “guilty pleasure” from our vocabulary. We work hard! We deserve to enjoy life’s little pleasures where we find them, without an ounce of guilt…be they romance novels, long baths, rock climbing trips, or something else. In fact, I’m off to have a pedicure right after I finish this post.
What’s your favorite not-so-guilty pleasure?

Thanks Tessa! Onto my review!
In One Dance with a Duke, we are introduced to a trilogy based around a club of men who together own a horse, The Stud Club. The Stud Club takes the focus at the beginning and towards the end of the book with the middle being my favorite part, the boy meets girl part! Maybe a bit too much horse and murder talk for me. I will admit though, I love a good mystery!

Heroine Amelia is rather likable, she’s not too worried about the fact that she is unmarried and puts her family first. When making all of her decisions she always thinks about how it will affect her family. She comes to know Spencer through one of her brother’s gambling debts. And I love the scene when they meet, it really shows off both of their personalities and how they sometimes (a lot of the time) clash.

I found Spencer to be a bit rough and aggressive towards Amelia at some points to the point of unattractiveness, most of the time in the way he spoke to her in the bedroom, but when the narration was from his perspective I found him to be a lot more likable then when we were viewing him from Amelia's eyes.

While this book didn't burn as bright for me as some of the others in the genre I have read, I think this is an intriguing set up for a trilogy with the mystery spanning what appears to be all three books. Can’t wait to find out more about the quiet and mysterious Rhys in the next book, Twice Tempted by a Rogue.

One Dance with a Duke was released on May 25th 2010
Genre: Historical Romance
3/5 Stars
Review copy provided by the publisher

And here is the hilarious trailer you must watch!