Hey everyone! With not so much on tv this summer I'm all about Pretty Little Liars (and So You Think You Can Dance and True Blood ok maybe there is more tv then I thought...!). Khyrinthia of the Frenetic Reader and Carol of Booklover Carol were talking. We've all read or are in the process of reading the books from the Pretty Little Liars series and are going to watch the show, we thought it might be fun to do a weekly post about the show and it's different aspects and how it also relate to the book! We've split our discussion into 3 parts and this week I am the last section, check out Part 1 (Carol) and Part 2 (Khyrinthia) to see the rest of our chat! And please join in, we'd like to hear what you think too! 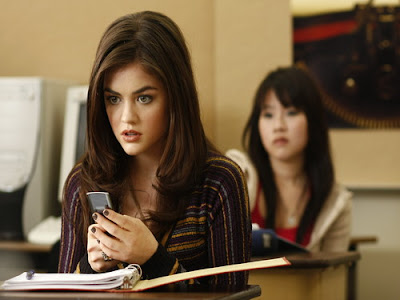 C: I love "Secret" by The Pierces and was I was glad that their song was featured in the episode, especially since the lyrics really go with the show.
"Got a secret
Can you keep it?
Swear this one you'll save
Better lock it, in your pocket
Taking this one to the grave
If I show you then I know you
Won't tell what I said
Cause two can keep a secret
If one of them is dead…"

A: I agree Carol, I think Secret by the Pierces was a great choice at the theme song. Speaking of the theme, I’m not sure if I’m digging the opening credits. I appreciate the idea but I don’t like the fact that it looks like they were dressing a doll almost until the very end. Maybe that was intentional but it was odd to me. I also really liked the song Suggestions by Orelia, what an interesting sound think I’m going to have to check out some more of her stuff.

K: Carol stole my answer! I agree with your thoughts on the credits, Alea. I like it until they get to the coffin part because some of the girls look kind of awkward standing there.

C: Yup, the credits are so weird and awkward. Maybe they'll change that later in the season.

See the full list of songs from the episode here.

A: I was so wrapped up with seeing how it followed the books since I had finished Book 1 (Pretty Little Liars) the morning it aired that’s pretty much all I was watching for. Obviously compared to the book a lot less can happen in one episode so I’m interested in seeing how the rest of the plots from the book play out in the next few episodes along with plots from Book 2 (Flawless) since we’ve already passed the funeral and have reopened the investigation as murder!

K: I liked it! I don't like it as much as the book so far, because right now it's not as full of tension. I was really distracted by the acting and writing though- some lines were so cheesy and some of the girls overact. It's distracting! But I'm sure it will get better.

C: Yes it's very much like a soap opera, leaning to the overdramatic. But I am glad that it's not much different that the books! And Khy, I agree. There's not much tension yet. And I don't like the girl that plays Alison. She is not like Alison that is in book. She just doesn't capture book-Ali's essence.

NEXT WEEK: The Jenna Thing (Episode 2)

Photos credit of ABCFamily.com
Posted by Alea at 7:00 PM