"Ding dong the bitch is dead."

This week we are discussing both episodes 3 (To Kill A Mocking Girl) and 4 (Can You Hear Me Now?)! As always make sure to visit my partners in crime Carol and Khy for the rest of the chat! 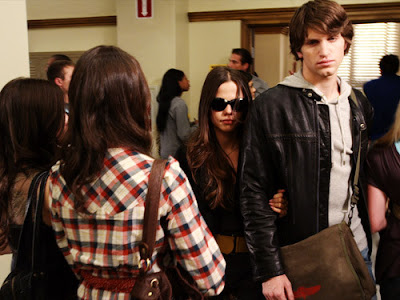 TV SHOW VS BOOK SERIES
Alea: The girls are so so so much friendlier on the show than in the books! I was shocked Spencer told Hanna about the Golden Orchid thing!

Khy: Me too! Hanna is not as bitchy on the show.
I don't really believe she's so popular on the show.

Carol: The girls are tamer and more friendly with each other in the show. They're like BFF's instead of the acquaintances they're in the books.

Alea: Yeah she's a little laid back for being a Queen Bee.

Did you notice her outfit at the end of Episode 3 when they are in the woods, seems like something she wouldn't be caught dead in! An off the shoulder sweatshirt and Uggs?!

Khy: For Rosewood that is practically low class. xD

Alea: Yeah it was just weird, really caught me off guard.
Carol: Haha yeah, Khy. Emily is more glamorous in the show and Hanna is laid-back when not in school.

Khy: Speaking of the town, they don't seem to be mentioning that everyone there is insanely rich, like in the books.

Alea: Yeah I guess maybe we are just supposed to assume but it's hard to do so. Like in the books they wear uniforms but on the show they don't so it's not instantly known they go to private school, we don't get that reminder.

Khy: Other things: some characters are barely in the show. Like Mona.

Alea: Agreed but I think in the books she kind of came and went but I agree, like she was in the car with Hanna when she crashed it in the book.

Khy: Jenna, too. I hate when she just walks by and says something and doesn't appear again.

Alea: Yeah I guess they are trying to up her creepy factor.

Khy: She's not creepy, she's just weird.
Carol: Jenna seems more bitter in the show. Like she's mad and resentful towards the girls and Alison even though she doesn't know it was them that made her go blind.

Alea: I think they have watered down A's messages, but I really liked the one she left for Hanna, on the radio as a request. That was good!

Khy: Oooh I liked that one a lot! 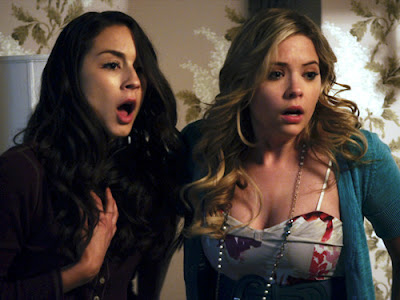 Khy: That's true.
I don't like what they're doing with Toby/Emily. It's weird. 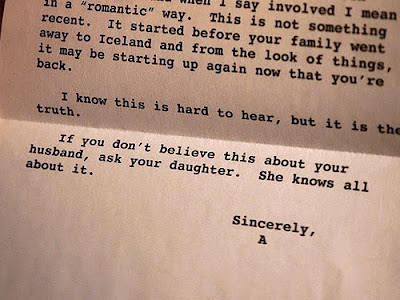 Alea: If I remember correctly his smile gives me chills, in a bad way.
Do you think A told Aria's mother about Meredith without blackmailing Aria first (like in the book) as punishment for them blocking A from sending them messages?

Khy: Yeah, I think that was the idea.
I can't wait to see what they do with Aria's mom.

Alea: Yes it will be interesting, since we don't even know if Meredith and Byron are together right now, it will have to veer away from the books.
Carol: Aria's mom seems much nicer in the show than the books so I don't know if she'll kick Aria out of the house like she does in the book.

Photos credit of ABCFamily.com
Posted by Alea at 7:20 PM