Inside the Mind of Gideon Rayburn by Sarah Miller 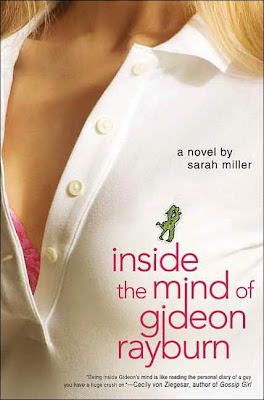 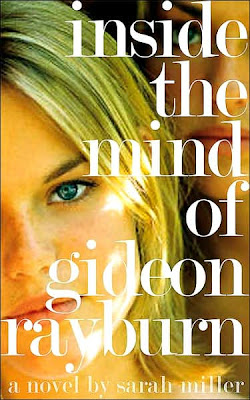 Paperback
Amazon.com:
What if you could get inside the head of the boy you love? Hear his every thought...? Know his every dream...? Listen in on his every fantasy...?
The narrator of Inside the Mind of Gideon Rayburn can, and she tells us the story of her beloved Gid, an adorably clueless boy who flukes his way into one of the fanciest New England prep schools.  Gideon's more than a little out of his league at Midvale, especially compared to Cullen and Nicholas, his charming but morally ambiguous rommates. They terrorize Gideon as they initiate him with a bet over Gid's borderline virginity, and the feisty, sexy Molly McGarry. Gideon is torn--he wants to prove himself, bu he also wants Pilar Benitez-Jones, the most beautiful girl he's ever seen. Hooking up with Molly might be possible, but winning Pilar would be legendary. On the other hand, Gideon actually likes Molly. It's all incredibly confusing and intoxicating. And one hysterically funny girl is savoring Gideon's every thought. But who is she?
I've always thought the hardcover for this book was suggestive in a way that didn't really fit with the book but the paperback is a little blah, so this is a toss up for me.

Have you spotted a Hardcover vs. Paperback you would like to contribute? Send me an email!
Posted by Alea at 7:30 AM