This Year in Movies: February 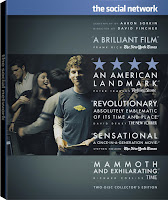 This was a month of strictly movies, 7 to be exact, no tv on dvd shockingly! All the movies were sort of ok with none standing out as amazing.

Dinner for Schmucks - Pretty much exactly how I thought it would be, super annoying but still kind of worth seeing if only for all the random hilarious people that showed up in the movie, including the guy from the IT Crowd!

I Hate Valentine's Day - I was hoping this would bring back some of the magic of My Big Fat Greek Wedding and unfortunately it really didn't. Nia smiled so much and in a seemingly unnatural way it really kind of ruined her character, it's like her face was frozen that way for most of the movie.

Step Up 3 - I kind of dig these Step Up movies... I hope they keep making them.

The Other Guys - Some of Will Ferrell's movies lately have been really really stupid and while this was still stupid I liked it more than some of his other ones, it was pretty funny at a few points. Loved the guest stars at the beginning.


Grown Ups - Sort of a cute family type movie with humor that isn't really appropriate for young family members if that makes any sense?

The Social Network - Interesting, I sort of wished it had covered more time it ended sort of all of a sudden for me

Center Stage 2: Turn It Up - Damn was this not good, yet I kept watching. While the first Center Stage movie was on the cheesy side this just took it to a really kind of crappy place.
Posted by Alea at 12:00 AM