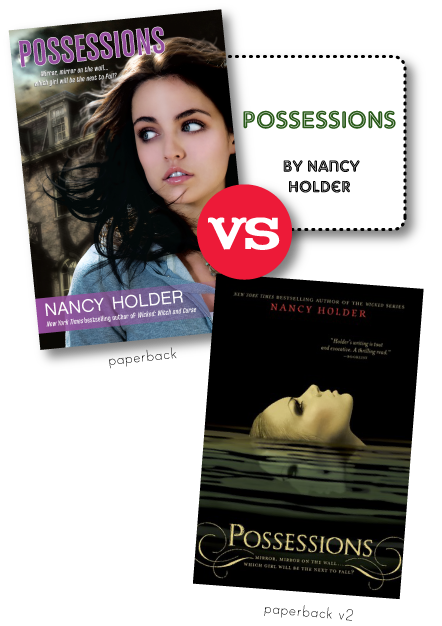 The It Girl meets The Exorcist in this chilling, haunted boarding school tale. New-girl Lindsay discovers all is not right at the prestigious Marlwood Academy for Girls. Ethereal, popular Mandy and her clique are plotting something dangerous. Lindsay overhears them performing strange rituals, and sees their eyes turn black. It doesn’t help that the school itself is totally eerie, with ancient, dilapidated buildings tucked into the Northern California woods, a thick white fog swirling through campus. There are hidden passageways, odd reflections in the windows at night, and scariest of all is the vast lake rumored to have captured the ghost of a girl who drowned many years ago.
What Lindsay doesn’t yet realize is that Mandy and her cohorts are becoming possessed by spirits who have haunted the school for two hundred years. Spirits who want someone dead...
And that someone is Lindsay.

You can definitely tell that the publisher is approaching this book cover from two very very different directions. The original paperback, that one caught my attention, in that initial tagline I gravitated more towards the It Girl instead of The Exorcist, I thought it might be kind of a fun and scary read. Whereas the second paperback, damn that one is scary! Looks like something out of the movie The Ring (which I refused to see) and that definitely would have made me steer clear of this book if that had been the cover when I bought it. I haven't read it so I can't say which cover fits it better, can anyone weigh in?


Have you spotted a Hardcover vs. Paperback you would like to contribute? Send me an email!
Posted by Alea at 6:00 AM