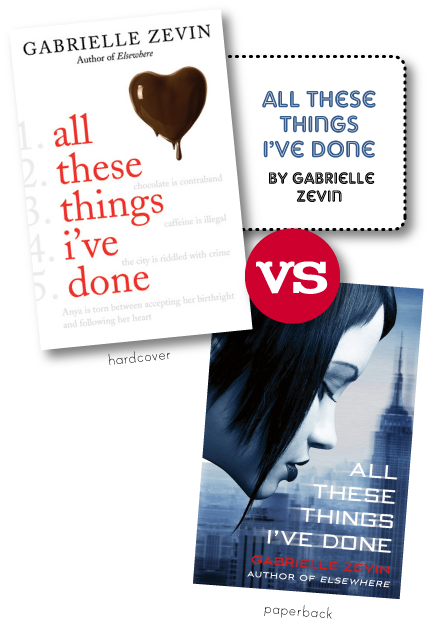 In 2083, chocolate and coffee are illegal, paper is hard to find, water is carefully rationed, and New York City is rife with crime and poverty. And yet, for Anya Balanchine, the sixteen-year-old daughter of the city's most notorious (and dead) crime boss, life is fairly routine. It consists of going to school, taking care of her siblings and her dying grandmother, trying to avoid falling in love with the new assistant D.A.'s son, and avoiding her loser ex-boyfriend. That is until her ex is accidently poisoned by the chocolate her family manufactures and the police think she's to blame. Suddenly, Anya finds herself thrust unwillingly into the spotlight--at school, in the news, and most importantly, within her mafia family.

Sounds like an interesting story. I've always thought the Hardcover was a bit on the too simple it becomes plain side so maybe the paperback is a better choice. There isn't a whole none going on with the paperback either but it establishes the atmosphere.

Thanks to Gail who suggested this H vs P!
Have you spotted a Hardcover vs. Paperback you would like to contribute? Send me an email!