I am a huge fan of the Sally Hansen Salon Effects Nail Strips (I'm actually wearing some as I type this) so when given the opportunity I wanted to try out the Jamberry Nails nail shields.

The Jamberry Nails nail shields are made from vinyl so to apply and remove you need to use a hairdryer to heat them up to make them a little bit flexible. So they take a little bit more work and time to apply them. 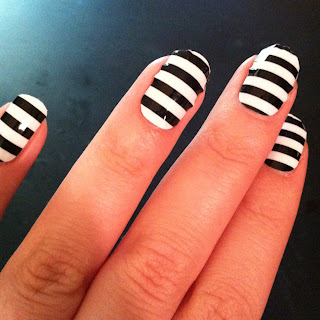 From far away they look pretty great right? I got tons and TONS of compliments on them. But from my perspective the below pictures are what I was seeing and having to deal with. Maybe not so much worth the time... 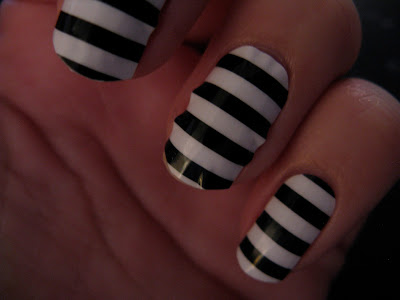 Being a perfectionist this is pretty hard for me to deal with. Not a very smooth application. 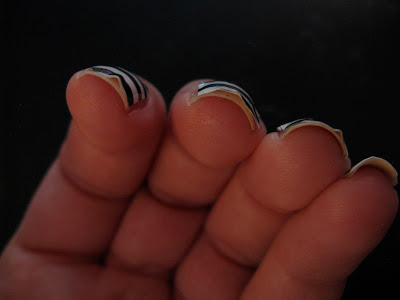 So I had some mixed feelings about these. I loved the pattern and there are 250+ more where these came from. They definitely have the most variety in this type of general nail application I've seen. It was really hard to pick which ones to try. And you get enough nail shields for at least 2 applications so you are definitely getting a lot for your money. So they have that going for them.

I applied my pinkies first and those two are the only ones I could keep on my nails for more than a few days. They laid the flattest, not perfect but good enough. The rest were super wavy on the sides and some tips, getting caught on things and dust was getting stuck underneath them since they were not at all flat to my nails (besides the pinkies), basically I had to get them off my nails after a few days, I couldn't stand the application. I've seen pictures of people wearing them and they looks great on their nails though, so maybe it's my nail shape that isn't working in this situation. I saw a lot of pictures of flat short nails (which I don't have) so maybe they work better on those types of nails? I watched the application video several times and read the directions several times so I really don't think it was user error. The first two I put on stayed the best!

Jamberry Nails states that these should last for 2 weeks so I wanted to test that claim out. I left the two pinkies alone for two weeks. Technically they did stay on my nails for that entire time but sometimes when I would run my hands through my hair or wash my hair they would start to peel up from the nail bed but I just pressed them back down and they stayed.

So my verdict on this is it's a mixed bag. They definitely have a lot of great things going for them but also for me personally didn't meet my standards for how I wanted them to look when applied. Have you tried Jamberry Nails? What did you think of them?

Received this product complimentary for testing and review purposes