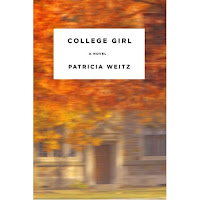 The last few weeks I've noticed several people participating in "Waiting On" Wednesday so I thought I would give it a go! "Waiting On" Wednesday is hosted by Jill at Breaking the Spine!
College Girl by Patricia Weitz
Product Description from Amazon.com:
College Girl is a vivid portrait of life on a college campus and a poignant look at what happens to a twenty-year-old college senior (and her self-esteem) when she loses her virginity and falls for the wrong guy.

Just as Curtis Sittenfeld’s bestselling Prep drew us into the world of boarding school and its social relationships, College Girl perfectly captures the experience of college, of being a student at a big state university— complete with its jocks and hipsters, frats and sororities, drinking rituals and cafeteria food, its economic, academic, and social pressures—and how it gets funneled into the campus culture of collegiate sex and dating. In particular, College Girl reveals what all this means for a girl inexperienced in sex and romance, dealing with the demons she’s brought from home.

College senior Natalie Bloom is beautiful and ambitious, but also incredibly insecure and painfully uncomfortable with the subject of sex—let alone the act. She’s awkward at developing friendships with girls, but it’s sexual attention from boys that really makes her lose her cool. At age twenty, she’s a virgin—never having had a boyfriend. Avoiding her peers, Natalie hides out most weekends in the library. That is, until she meets Patrick, her fantasy (she thinks) of a cultured, intellectual Prince Charming—and everything changes. But the more time they spend together, the more Patrick brings out her worst insecurities. Natalie loses her virginity before she’s ready, and as their sexual activity escalates, Natalie’s emotional responses become dangerously self-destructive. Ultimately, she must take extreme measures to reclaim her sense of self, her confidence, and her ambition.

An insightful, moving, and achingly self-aware novel that offers the psychological and emotional insight of Judy Blume and Ann Brashares, College Girl will resonate with anyone who remembers the often awkward transition from adolescence to adulthood.
Graduating from college about a year and a half ago I think I'm gravitating towards anything college related because I miss it! This definitely sounds like an interesting study of the character, Natalie.
I can't wait for College Girl to be released December 26th! I think I will get over my strong dislike of hardcovers and buy this one the day it comes out!
Posted by Alea at 6:02 AM