Kisses and Lies by Lauren Henderson 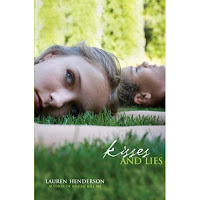 From Amazon.com:
After discovering that someone saw what looked like Dan’s emergency EpiPen in A-lister Plum’s designer handbag, Scarlett and her tough American sidekick, Taylor, sneak into a posh London nightclub, where Plum has a private table. Scarlett is stunned to discover a piece of evidence that might implicate another girl in Plum’s exclusive circle, Lucy Raleigh. Which means Scarlett must cast a wider net in order to catch the right suspect.

Back at school, groundskeeper Jase is hoping to take Scarlett’s mind off her troubles with some heart-stopping kisses. Scarlett can’t help but feel guilty for indulging in romantic rendezvous when she should be hunting down Dan’s killer. However, once Scarlett finds out how Lucy is connected to Dan, she knows she must drop everything and travel to the McAndrew estate in Scotland to hunt for more clues. But when she arrives, Scarlett becomes the target of a dangerous hunt herself.

A Warning: Don't read this book unless you have read Kiss Me Kill Me, the prequel! You will be very confused!

Kisses and Lies picked right up where Kiss Me Kill Me left off. There is a small recap from the previous book but not enough in my option to skip the first book. Scarlett and Taylor have become great friends and are determined as ever to solve Dan's murder. In my opinion all the really good stuff happens in this book and Kiss Me Kill Me is just the set-up for all of this to happen! A whole family of new characters of introduced, lengthening the suspect list greatly. Some of the situations are humorous while others are deadly serious, but all the while a great time to read! Also, Scarlett and Jase's relationship starts to blossom, not without its problems.

For me the best part of the book is when Scarlett goes to Scotland and meets Dan's family. Man was a group, and what a castle. You don't know who to trust or where you are safe or if Scarlett is going to be stuck going round and round in circles around the castle before finding the stairs! This was my kind of mystery! It did get a bit wonky towards the ending and I have to admit I sort of guessed who the killer was after a bit, but it was still great fun and I never knew what was going to happen next! The ending of this book is much more satisfying than the first book's ending but it definitely sets it up for a third book. Which in my opinion looks like it could be rather good and hopefully involving a love triangle or two!

Read my review of the previous book, Kiss Me, Kill Me here.

Kisses and Lies was released on January 13th.