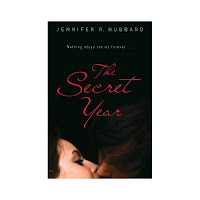 Colt and Julia were secretly together for an entire year, and no one—not even Julia’s boyfriend— knew. They had nothing in common, with Julia in her country club world on Black Mountain and Colt from down on the flats, but it never mattered. Until Julia dies in a car accident, and Colt learns the price of secrecy. He can’t mourn Julia openly, and he’s tormented that he might have played a part in her death. When Julia’s journal ends up in his hands, Colt relives their year together at the same time that he’s desperately trying to forget her. But how do you get over someone who was never yours in the first place?

The Secret Year is the stuff movies are made of, John Hughes movies to be more specific. Rich kid and kid from the wrong side of the tracks fall in love... I really noticed the emphasis the author placed on Colt and Julia's differences background wise. While that was fine, I do wish a bit more of the spotlight had been pointed at getting to know who Julia was.

I thought the use of a journal was a great way to see inside of Julia's head and heart, to understand things about her that she never shared out loud with Colt. The idea of someone being taken so suddenly is always interesting to explore. There are what ifs, unsaid words, confusion and grief and guilt. These passages were so interesting so it would have been nice if there had been more of Colt and Julia's time together.

Overall I would say this book is about a boy trying to find himself in the aftermath of the death of someone he loved. He's confused and makes mistakes along the way but it's an honest journey.

The Secret Year will be released on January 7th
Genre: Young Adult
4/5 Stars
ARC provided by publisher
Posted by Alea at 9:43 PM