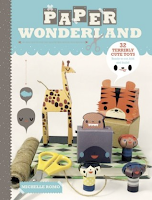 This is a collection of super kawaii-like paper toy templates--ready to be cut out, built and played with or displayed. So sweet they make your teeth hurt, Michelle Romo’s cute style can be summed up as Japanese-influenced cuteness with mid-century modern flair. Her characters can be brought into 3D life with only an X-acto knife and some glue. Besides people and animals, the collection also includes an adorable house, a sweetly spooky ghost and moustaches that can be assembled and worn.

So I've been talking about crafts more and more lately but one thing I may not have mentioned is my obsession with paper toys from a few years ago. I think I had made probably 30 when I was done and even designed one of my own! I think this book is going to revive that obsession, they are just beyond cute!
What can't you wait for to be released?
"Waiting On" Wednesday is hosted by Jill at Breaking the Spine!
Posted by Alea at 6:00 AM