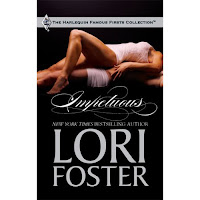 She was his obsession.

When she was bad, she was better!

On the outside, Carlie McDaniels was a shy, no-nonsense schoolteacher. But on the inside, there was another Carlie -- a sultry, sexy femme fatale -- burning to get out. One night, she did. And lady-killer Tyler Ramsay didn't know what -- or who -- hit him!

Tyler had a problem. He was obsessed with a mystery woman -- and fascinated by prickly Carlie McDaniels. How could he desire two women at the same time? And what was he supposed to do when he found out they were one and the same?

I loved the premise for this book, shy woman dresses up for a costume party in a costume that no one can recognize her in, she has a very HOT interaction with a man she's always had a crush on and then makes a run for it before he can find out it is her. In their real lives they end up working on a project together and start to have feeling for each other but Tyler doesn't know that Carlie is also his mystery woman who he can't stop thinking about!

I loved their interactions, their flirting, their are we just friends one minute and maybe more the next. Tyler tries to lure Carlie out of her shell and she makes him think about his actions. They are a perfect match, helping each other grow.

Towards the end of the book when all is revealed and they are hashing it out they sort of lost me, for awhile I had no idea what they were actually fighting about. But this is a romance novel and eventually all is sorted out.

When reading this book it was like my nose was glued to the book, I started it in the afternoon and finished that evening, and that almost never happens for me! I look forward to reading more of Lori Foster's books.

Impetuous was reprinted on June 1st 2009
Genre: Contemporary Romance
4/5 Stars
From Bookmooch
Posted by Alea at 6:00 AM