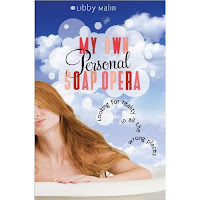 My Own Personal Soap Opera by Libby Malin

Frankie McNally doesn't just write for a soap opera, her life resembles one. Head writer for the soap opera, Lust for Life, Frankie is being courted by both Victor Pendergrast, a dashing older man sent in to save the show's sagging ratings, and Luke Blades, the soap's totally hot leading man. Just when she thinks life can't get more complicated, a jewel thief starts copying the show's storyline—a development that could send the show's ratings soaring if it doesn't get Frankie and Victor arrested first. Can Frankie write her way out of this one? And can she put make-believe aside long enough to discover the truth of her own heart?

This one sounds chick litty/romancy with a mystery thrown in. Something I've liked lately so this one could be fun!
What can't you wait for to be released?
"Waiting On" Wednesday is hosted by Jill at Breaking the Spine!
Posted by Alea at 6:00 AM