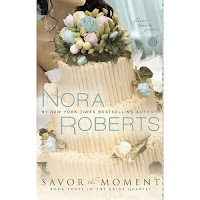 Savor the Moment by Nora Roberts

Wedding baker Laurel McBane is surrounded by romance working at Vows wedding planning company with her best friends Parker, Emma, and Mac. But she's too low-key to appreciate all the luxuries that their clients seem to long for. What she does appreciate is a strong, intelligent man, a man just like Parker's older brother Delaney, on whom she's had a mega-crush since childhood. But some infatuations last longer than others, and Laurel is convinced that the Ivy League lawyer is still out of her reach. Plus, Del is too protective of Laurel to ever cross the line with her-or so she thinks. When Laurel's quicksilver moods get the better of her-leading to an angry, hot, all-together mind-blowing kiss with Del-she'll have to quiet the doubts in her mind to turn a moment of passion into forever...

I had fun with the first book in the series and definitely want to see the series through, I love the concept (and the cover!). 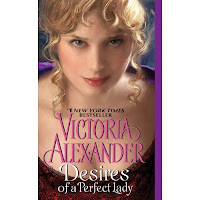 Desires of a Perfect Lady by Victoria Alexander

A secret list of the desires of Lady Olivia Rathbourne:

A decade ago, Olivia had expected to marry the Earl of Wyldewood, only to have happiness stolen from her before his ring could be placed upon her finger. Now he stands before her, as proud and arrogant and handsome as ever, vowing to rescue her. Well, he's got some nerve urning up after all these years. Where was he when she needed him?

As for the earl, scandal has never touched him nor has impropriety ever besmirched his name. But his penchant for doing the expected does have his family calling him, well, dull. Isn't it time to flaunt society's conventions and do what he's always wanted? And first on his list: Olivia in his bed—with or without a wedding.

I love the idea of flirty revenge happening here! Sounds like it's going to be great! 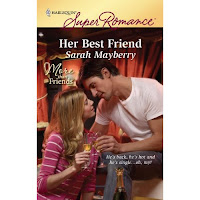 What's a girl to do when she's secretly in love with a friend and he's married to someone else? She gets over it. That's what Amy Parker has done. Rather than lose her best bud Quinn Whitfield with an ill-timed, crazy confession of affection, she's taken the smart route. She's eased away from him. Just enough to get past the unrequited bits. And you know, it's working.

Until the day Quinn announces he's now single. That's right. He's single. And he wants to hang out. With her. Get reconnected the way they used to be.

Oh, this is so not good for Amy's equilibrium. Daily doses of Quinn remind her of everything she loves about him. But if he's free…and she's free…well, maybe the time has come for one of those crazy confessions.

This just sounds so cute!!! Who doesn't fall for a friend at some point in time and to see it actually work out, this will be fun!

What can't you wait for to be released?
"Waiting On" Wednesday is hosted by Jill at Breaking the Spine!
Posted by Alea at 6:00 AM