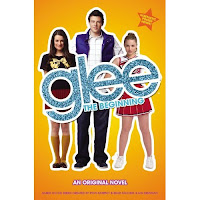 Glee: The Beginning by Sophia Lowell

Ok so there is no summary for this book that I can find yet, but that doesn't matter! This was on the wall of the Hachette booth at BEA (they gave out shirts with a Rachel quote on them) and the second I saw it I started asking questions. I found out, as you can probably tell from the title it's a Prequel to the show. And on Amazon in the title it also says (Glee Original Novels) like there will be more!

And yes I know what you are thinking, books based off tv shows are usually kind of weird and I don't think I've read any since Clueless, but this, this I will buy the day it comes out! It's freaking GLEE people! And also another added benefit for me, it's paperback, double awesome!
Released September 1st 2010

What can't you wait for to be released?
"Waiting On" Wednesday is hosted by Jill at Breaking the Spine!
Posted by Alea at 6:00 AM