I've got a duo for you today! Need and Captivate by Carrie Jones. 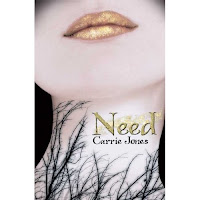 Zara collects phobias the way other girls collect Facebook friends. Little wonder, since life’s been pretty rough so far. Her father left, her stepfather just died, and her mother’s pretty much checked out. Now Zara’s living with her grandmother in sleepy, cold Maine so that she stays “safe.” Zara doesn’t think she’s in danger; she thinks her mother can’t deal.

Wrong. Turns out that guy she sees everywhere, the one leaving trails of gold glitter, isn’t a figment of her imagination. He’s a pixie—and not the cute, lovable kind with wings. He’s the kind who has dreadful, uncontrollable needs. And he’s trailing Zara.

With suspense, romance, and paranormal themes, this exciting breakout novel has readers rapidly turning the pages.

Zara and her friends knew they hadn't solved the pixie problem for good. Far from it. The king's needs grow deeper every day he's stuck in captivity, while his control over his people gets weaker. It's made him vulnerable. And now there's a new king in town.

A turf war is imminent, since the new pixie king, Astley, is moving in quickly. Nick nearly killed him in the woods on day one, but Zara came to his rescue. Astley swears that he and Zara are destined to be together, that he's one of the good guys. Nick isn't buying it, though Zara isn't as sure -- despite herself, she wants to trust the new king. But it's a lot more than her relationship with Nick that is at stake. It's her life -- and his.

Here's how to enter to be one of two winners of a set of Need (paperback) & Captivate (hardcover)!

The giveaway is open to addresses within the U.S. only.

**Prize provided by marketing firm and sent by me**
Posted by Alea at 6:00 AM