This Week In Books or Oh Noes! 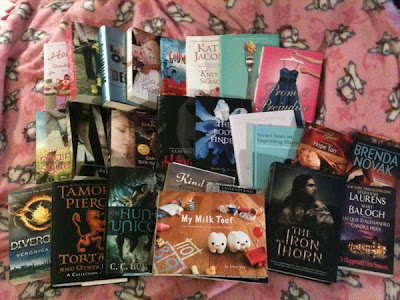 Purchased a few too many books this week compared to recently! Oops!

Just Shows Up Review Copies:
The Hunt of the Unicorn by C.C. Humphreys
Kindred by Tammar Stein
The Iron Thorn by Caitlin Kittredge
Tortall and Other Lands by Tamora Pierce
It Happened One Season by Various
Tomorrow Girls: Behind the Gates by Eva Gray
Divergent by Veronica Roth
Inside by Brenda Novak

I also got my copies of Angelfire and A Touch Mortal signed!

Borders Closing Sale:
Maine Squeeze/Banana Splitsville b Catherine Clark
XVI by Julia Karr
Forget You by Jennifer Echols (had to get a final copy since I'm quoted in it!
I Like Him. He Likes Her by Phyllis Reynolds Naylor
Godmother by Carolyn Turgeon
Delirium by Lauren Oliver
Happy Ever After by Nora Roberts
Knit the Season by Kate Jacobs
Holly's Inbox: Scandal in the City by Holly Denham
Prom and Prejudice by Elizabeth Eulberg
The Kid Table by Andrea Seigel

Amazon Order:
Scenes from an Impending Marriage by Adrian Tomine
The Tutor by Hope Tarr
My Milk Toof by Inhae Lee
A Knitter's Home Companion by Michelle Edwards
Posted by Alea at 6:45 PM