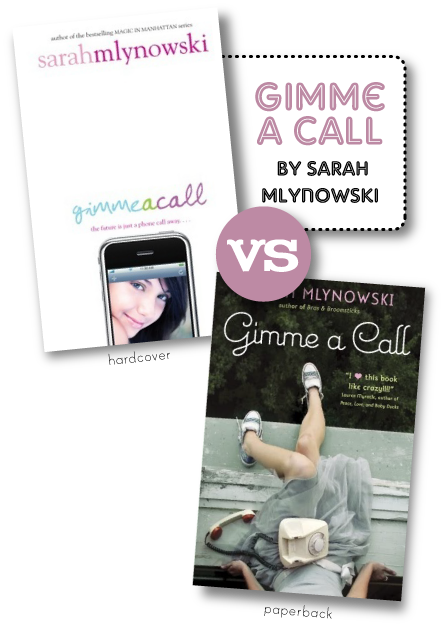 A new life is just a phone call away!

Devi's life isn't turning out at all like she wanted. She wasted the past three years going out with Bryan—cute, adorable, break-your-heart Bryan. Devi let her friendships fade, blew off studying, didn't join any clubs . . . and now that Bryan has broken up with her, she has nothing left.

Not even her stupid cell phone—she dropped it in the mall fountain. Now it only calls one number . . . hers. At age fourteen, three years ago!

Once Devi gets over the shock—and convinces her younger self that she isn't some wacko—she realizes that she's been given an awesome gift. She can tell herself all the right things to do . . . because she's already done all the wrong ones! Who better to take advice from than your future self?

You know when you just get that urge to run to a bookstore (RIP Borders-can't really do that so easily anymore!) and buy a book because it has this great cover, you might already have the book with a different cover but...everything comes together in this new cover. The picture, the pose, the clothing, the color, the layout, a quote saying an author loved the book like crazy! Basically you NEED IT. I think I want to be the girl in the picture on the paperback and have that phone (doesn't it look more magical than an iphone?) Paperback wins! If I have to nitpick (and I'm nothing if not a nitpicker) I'd say I might have picked a different font for the title but something very similar.

Thanks to Gabrielle who suggested this H vs P!