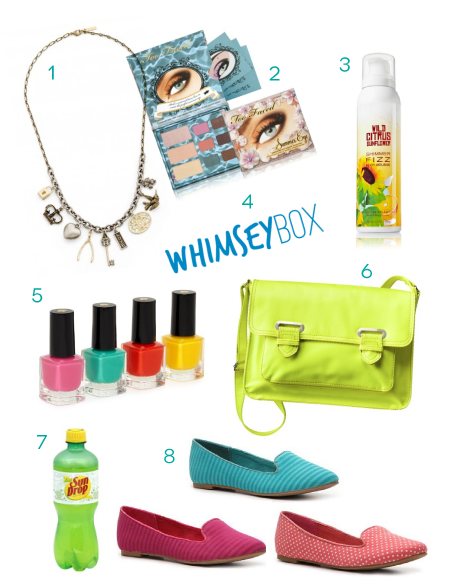 1. Lucky Charms Necklace from Jewelmint- I saw this a few months ago and then it was sold out. Luckily it recently came back in stock and I grabbed it! Too cute!  2. Summer Eye Summetime Sexy Shadow Collection from Too Faced- Basically with this you can turn yourself into a mermaid. It has some beautiful pinks, corals and greens! 3. Shimmer Fizz Body Mousse from Bath and Body Works- I'm obsessed with this stuff, it's like if pop rocks was a lotion. When you press your hands together with this it sounds like you are cooking an egg! 4. Whimsey Box Craft Supplies Subscription- This is a new subscription box I have been trying, you get like 4 to 5 different craft supplies a month, love the idea! 5. Travel Nail Polish Set from Kate Spade- When I saw Kate Spade was coming out with a nail polish set I freaked! The staying power of this is pretty good, I'm wearing the pink right now! 6. Xhilaration Yellow Cross Body Bag from Target- I love this purse, it's a great size and I love the crossbody style. I definitely get a lot of compliments when I use it too, especially paired with my neon yellow shoes! 7. Diet Sun Drop- This is my new favorite soda, it tastes to me like a cross between 7Up and Mountain Dew. 8. Teenz Flats from Dollhouse- At $20 these are a major steal. They are comfortable and very colorful. WIN.

I'll be honest. After the series had ended with the last book, and it was supposed to be finished I was kind of sad but understood. And then all of a sudden, the series was back from the grave, probably at least in part because of the success of the tv show. I was definitely skeptical, really could it come back and keep going after everything that had happened? Well I'm here to tell you it's TOTALLY BACK and just as great as it was before!

I'm going to try and keep this spoiler free.

So with the last book a lot of the questions were answered (it was supposed to be the last book after all). There was one possibility that was left open and this new book totally takes that and runs with it, it runs so far I still have no idea what's going on! But this book was awesome, it starts a whole new set of mysteries and the risks and possibilities for trouble are so much bigger that before.

As always, each of the girls have their own story lines, I always forget one of the big differences from the books to the tv show is that in the books the girls aren't actually friends that much of the time whereas on the tv show they are. So not surprisingly the girls aren't really on good terms for much of this book, but that's because they are keeping such a huge secret that they can't stand to look one another in the eye. Luckily by the end we know as much as they do regarding the secret (I think) so it's definitely satisfying in that way.

If you are a lover of PLL the books or the tv show I'd say read this. If you haven't read or watched PLL what are you watching for, it's so juicy and fun and scary and awesome! Get in on it! But seriously, if you are new to this series, start from the beginning, it wouldn't be much fun starting in the middle!

It’s been a year since the torturous notes from A stopped and the mystery of Alison DiLaurentis’s disappearance was finally put to rest. Now seniors in high school, Aria, Spencer, Hanna, and Emily are older, but they’re not any wiser. The pretty little liars have more secrets than ever—twisted secrets that could destroy the perfect lives they’ve worked so hard to rebuild.


Aria’s jealous of her boyfriend’s new exchange student. Spencer’s getting a little too cozy with her soon-to-be-stepbrother. Hanna’s one scandalous photo away from ruining her dad’s Senate campaign. And Emily will do anything to get a swim scholarship.

Worst of all: Last spring break in Jamaica, they did something unforgivable. The girls are desperate to forget that fateful night, but they should know better than anyone that all secrets wash ashore . . . eventually.
Posted by Alea at 11:56 AM 8 comments: 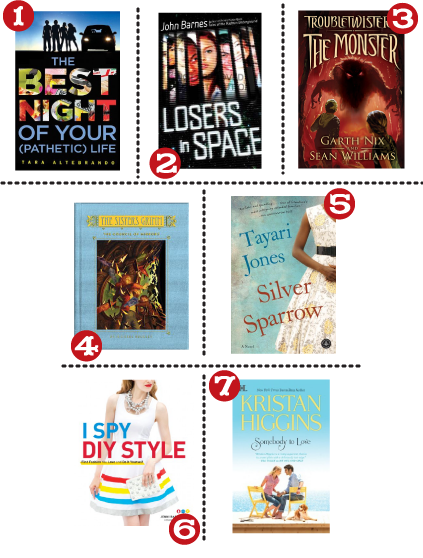 1. The Best Night of Your (Pathetic) Life by Tara Altebrando (Review)
2. Losers in Space by John Barnes (Review)
3. Troubletwisters: The Monster by Garth Nix and Sean Williams (Review)
4. The Sister's Grimm: The Council of Mirrors by Michael Buckley (Review)
5. Silver Sparrow by Tayari Jones (Review)
6. I Spy DIY by Jenni Radosevich (Amazon)
7. Somebody to Love by Kristan Higgins (Amazon) 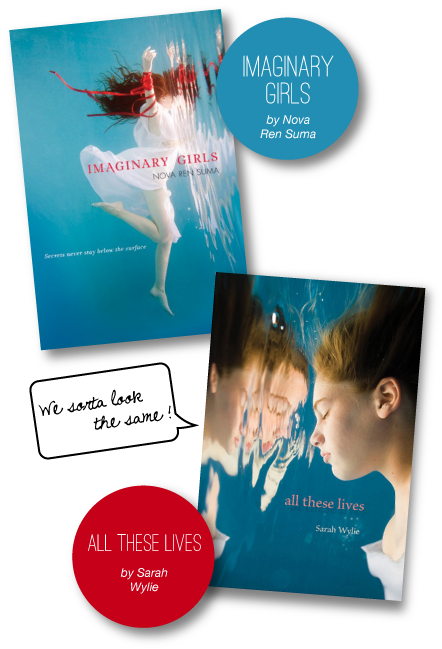 Usually I love compositions that are cropped in a little bit but in this case I'm enjoying Imaginary Girls because of all the movement in the image.
Thanks to Rachelia who suggested this lookalike!
Have you spotted a Lookalike you would like to contribute? Send me an email!
Posted by Alea at 6:00 AM 9 comments: 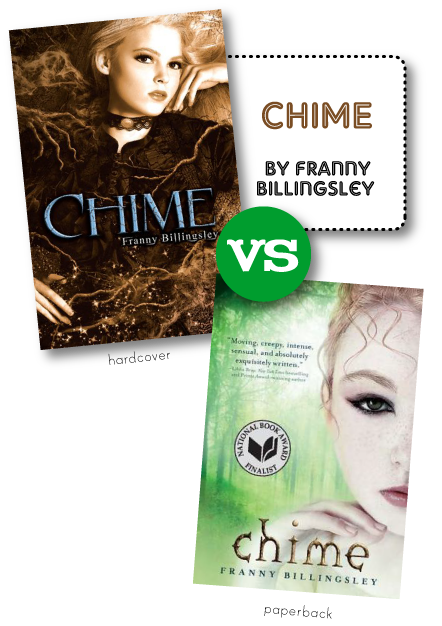 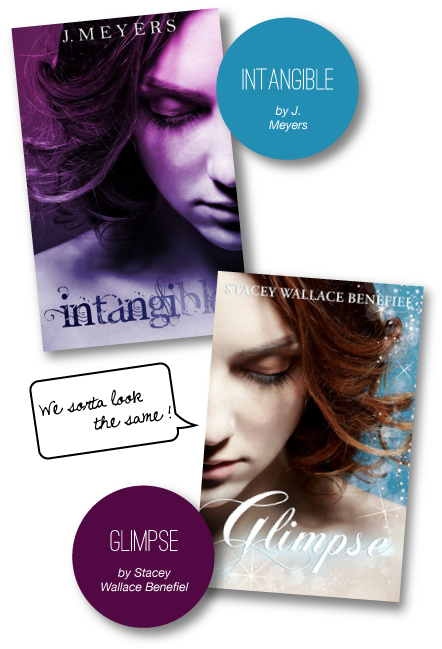 Both of these covers are perfectly pretty. Image treatment-wise I think I like Intangible a bit more because of the purple gradient going over the image, but the sparkle in Glimpse really blends into the image really nice and doesn't look artificial.

Thanks to Margie who suggested this lookalike!

Have you spotted a Lookalike you would like to contribute? Send me an email! 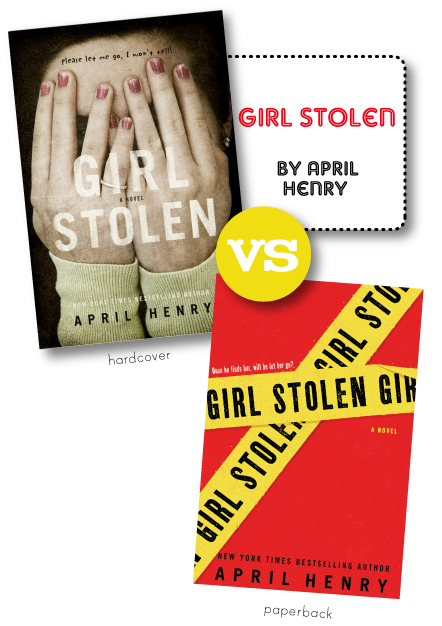 Sixteen–year-old Cheyenne Wilder is sleeping in the back of a car while her mom fills her prescription for antibiotics. Before Cheyenne realizes what’s happening, their car is being stolen. Griffin hadn’t meant to kidnap Cheyenne, but once his dad finds out that Cheyenne’s father is the president of a powerful corporation, everything changes—now there’s a reason to keep her. How will Cheyenne survive this nightmare? Because she’s not only sick with pneumonia—she’s also blind.

Wow, this sounds like an intense book. And I think the hardcover really captures what I felt from reading the summary, especially the fact that the girl's eyes are covered and even the gritty coloring of the photograph. 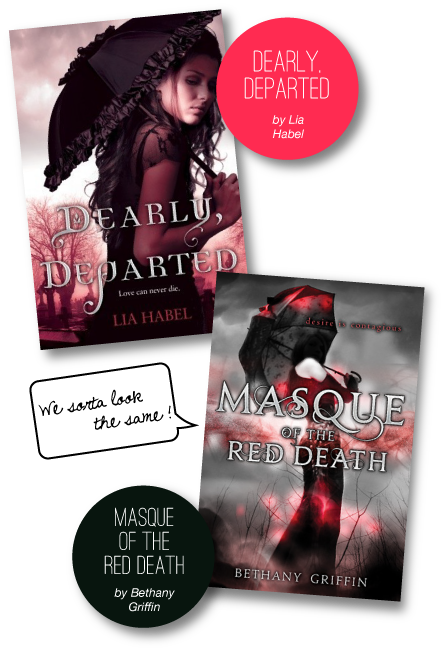 It's umbrella time! I definitely prefer Dearly, Departed. Love the color variation while still remaining pretty much two-toned. Also love the composition, basically both covers are using the same set of tools (color, image, feel) and one just does it better in my opinion.

Thanks to Laura who suggested this lookalike!

Have you spotted a Lookalike you would like to contribute? Send me an email!
Posted by Alea at 6:00 AM 2 comments: 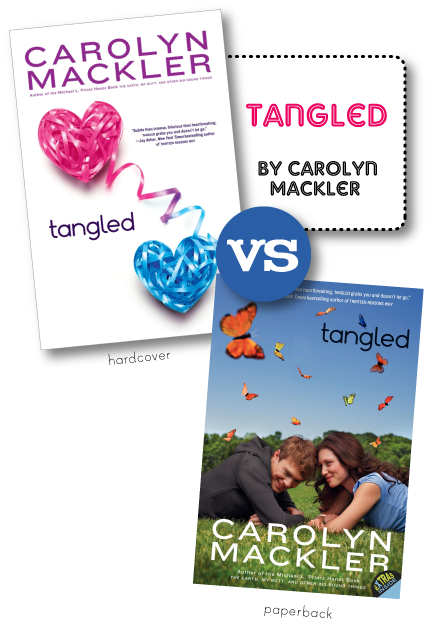 Maybe I'll decide I have a life story, too, and I'll reveal some of it.

The good girl, the jock, the beautiful one, and the geek. Tangle them together, and the unexpected happens.

Jena, Dakota, Skye, and Owen are all in Paradise. When they meet, they have no idea how they will all connect—or that their chance encounters will transform each of their lives.

The secrets we keep, the risks we take, and the things we do for love: Four months after it all begins in Paradise, none of them will ever be the same.

This summary doesn't say much about the story but I'll say the happy, smiling faces on the paperback makes me instantly like it. It just looks like a book you want to read, you want to get in on the secret! 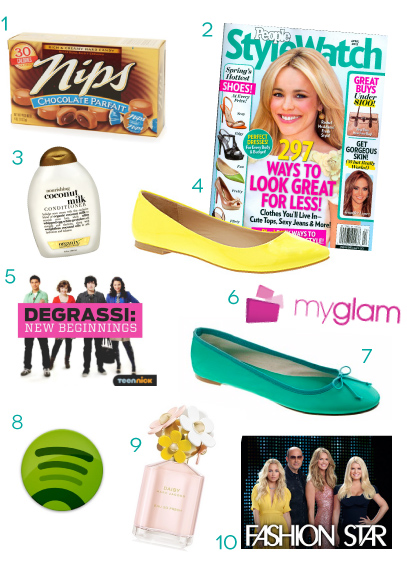 1. Nips-I've been addicted to these lately, love the soft candy center. 2. People Style Watch-Love this magazine and how its formatted. 3. Coconut Milk by Organix-This smells so good! 4. Hilser Flats from Aldo-These are so bright! I have them in pink too. 5. Degrassi-I love how long this show has been on the air and how kids graduate and new students join the cast. 6. MyGlam Bag Subscription-Has the subscription box craze gotten to you yet? This is a new makeup bag monthly subscription bag that is $10 a month and has high and low end beauty products. 7. Classic Leather Ballet Flats from J Crew-These are a dream (have them in purple too.) The color is so saturated. 8. Spotify-So much better than bringing a pile of cds to work. 9. Daisy Eau So Fresh by Marc Jacobs-Time to whip out the spring and summer scents. 10. Fashion Star-Love the spin on the fashion designer competition show. 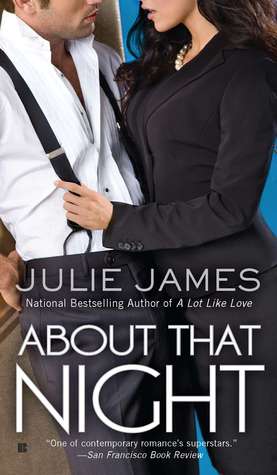 About That Night by Julie James (Amazon)
Posted by Alea at 7:15 PM 2 comments: 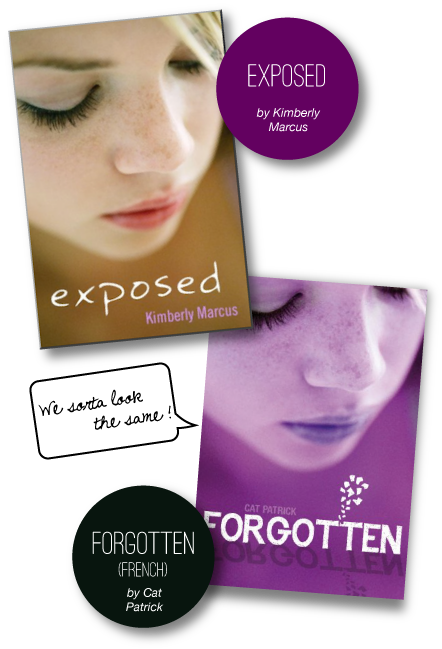 Here's a straight forward lookalike, pretty much the same cover created using the same layout and photo. When images of people go into the cool hues (like in Forgotten) the person starts to look dead (especially in the lips) based on the summary it doesn't seem like this book is about death (but who knows).

Thanks to Ingrid who suggested this lookalike!
Have you spotted a Lookalike you would like to contribute? Send me an email! 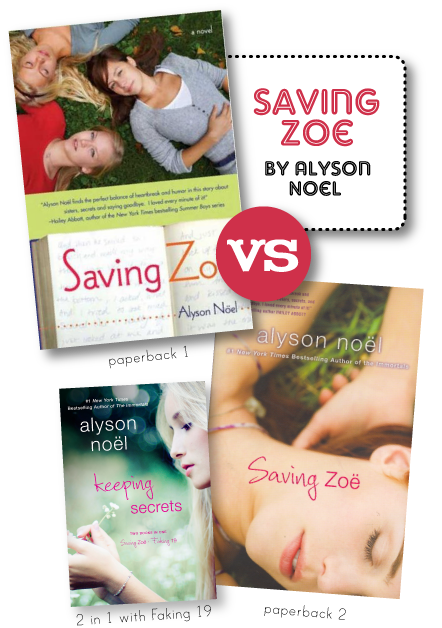 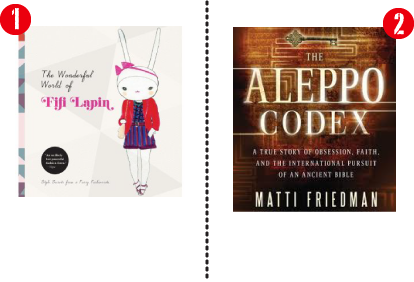