A Separate Country by Robert Hicks 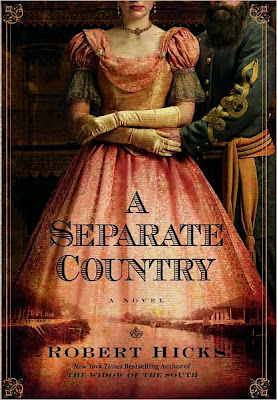 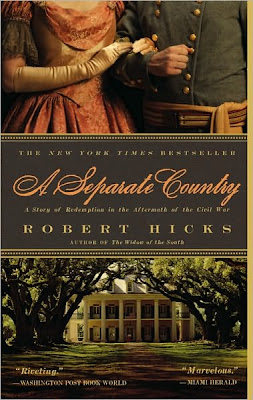 Paperback
Amazon.com:
Set in New Orleans in the years after the Civil War, A Separate Country is based on the incredible life of John Bell Hood, arguably one of the most controversial generals of the Confederate Army--and one of its most tragic figures. Robert E. Lee promoted him to major general after the Battle of Antietam. But the Civil War would mark him forever. At Gettysburg, he lost the use of his left arm. At the Battle of Chickamauga, his right leg was amputated. Starting fresh after the war, he married Anna Marie Hennen and fathered 11 children with her, including three sets of twins. But fate had other plans. Crippled by his war wounds and defeat, ravaged by financial misfortune, Hood had one last foe to battle: Yellow Fever. A Separate Country is the heartrending story of a decent and good man who struggled with his inability to admit his failures-and the story of those who taught him to love, and to be loved, and transformed him.
While this is a book I probably wouldn't ever read I am really attracted to the hardcover. The colors are so rich and I love the off center and cropped portrait and the typography, it all comes together to create a really yummy cover. While the paperback still uses those same basic elements it kind of loses its magic I think.
Have you spotted a Hardcover vs. Paperback you would like to contribute? Send me an email!
Posted by Alea at 9:14 PM 6 comments:

Well first of all, wow I have not been posting! Where has the time gone! Bad Alea! Anyhow.... all Just Showed Up Review copies this week. 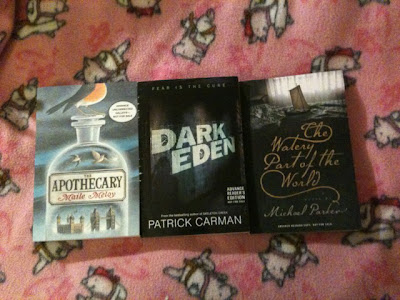 Apothecary by Maile Meloy
Dark Eden by Patrick Carman
The Watery Part of the World by Michael Parker
Posted by Alea at 10:22 PM 4 comments: 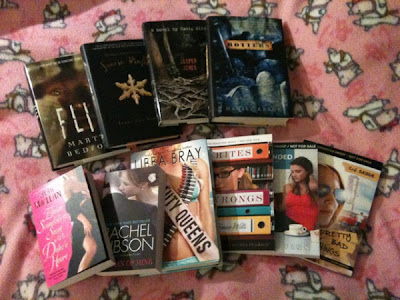 This week I got all "Just Showed Up Review Copies"!

Tuesday:
Eleven Scandals to Start to Win a Duke's Heart by Sarah MacLean


Beauty Queens by Libba Bray
The Rites and Wrongs of Janice Wills by Joanna Pearson
Unfriended by Katie Finn
Posted by Alea at 9:30 PM 9 comments:

What's the Best Book You Have Read Lately?

Among other generally good books, I've read some rather un-put-downable books lately, Attachments by Rainbow Rowell (which I now consider one of my all time favorite books) and Anna and the French Kiss by Stephanie Perkins, both I read in about a day or two. And those are exactly the kinds of book I need right now, ones that will keep me reading and reading and reading!

So I'm turning to you guys for some great suggestions for books you have read recently that you couldn't put down so I can keep myself on the right track and get back to my good ole friend reading once again!

Giveaway: Give Up the Ghost by Megan Crewe

Give Up the Ghost by Megan Crewe was a YA Paranormal I really enjoyed (see my review here) and it is coming out in paperback tomorrow, the paperback includes bonus material that wasn't available with the hardcover, such as a couple of deleted scenes featuring two ghosts who didn't make the final cut for the finished book! The author has been kind enough to give one of you a signed paperback!

Cass McKenna much prefers ghosts over “breathers.” Ghosts are uncomplicated and dependable, and they know the dirt on everybody . . . and Cass loves dirt. She’s on a mission to expose the dirty secrets of the poseurs in her school. But when the vice president of the student council discovers her secret, Cass’s whole scheme is threatened. So when Tim asks her to help him contact his recently deceased mother, Cass reluctantly agrees. As Cass becomes increasingly entwined in Tim’s life, she’s surprised to realize he’s not so bad—and he needs help more desperately than anyone else suspects. Maybe it’s time to give the living another chance. . . .

Here's how to enter to be the winner of the signed paperback of Give Up the Ghost:

**Prize provided by the author**

Check out the book trailer! 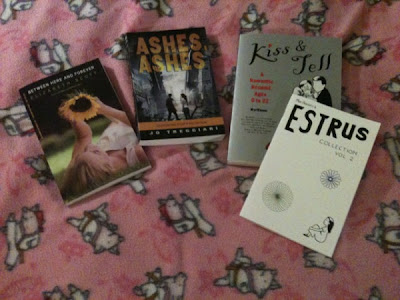 Kiss and Tell by Marni Naomi + Estrus Collection Vol 2 Comic (Purchased from Book Perk and I got the comic as the perk!)
Posted by Alea at 8:17 PM 3 comments:

I just got my computer back after it being off getting repaired for a week! Earlier this week I was featured on Figment's blog in the column Blogs to Stalk!

Thanks to Claire and the people over at Figment for featuring me!
Posted by Alea at 7:37 PM 5 comments:

This Week in Books or Guess What I'm Actually Reading! 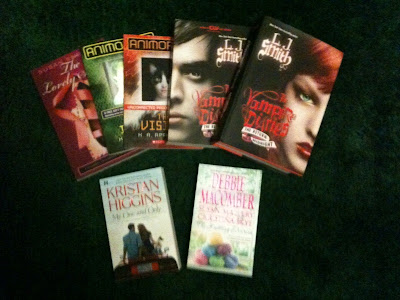 Things are looking up for the reader in me, I'm actually reading. I finished a book Friday that I had started about a week or so ago and an already halfway through another, rejoice! Now I just have to write some reviews before I forget what I have read! :P

This Year in Movies: March

This month I watched 7 movies and 1 tv show on dvd!

Monk Season 6- After taking a break for a bit I watched some more Monk!

The Romantics- I liked this but was hoping for just a little more something.

Life As We Know It- Really cute, I was hoping it would be great and it was!

Diary of a Wimpy Kid- Rewatch, I think I wished I was really in the theater seeing the new movie though!

Flipped- Sweet, I think the dvd case said something about it being an instant classic, I agree!
Posted by Alea at 12:00 AM 7 comments: