I took about 180 pictures while in Colorado and here is a small sampling... 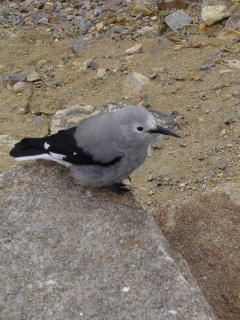 A cute little bird that was hanging out in the Rocky Mountain National Park where it was about 40 degree. He just sat there as I took pictures, very nice. 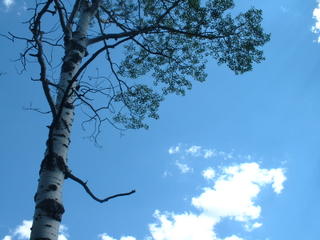 Probably one of my favorite pictures from the trip, I really liked this tree and took a bunch of pictures of it. It's beautiful 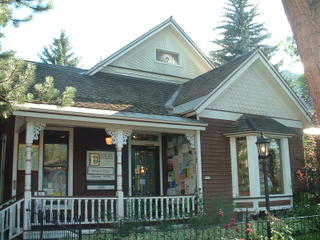 One of the six bookstores I went to, this one was in Aspen. I was impressed because they carried several Graphic Design magazines, rock on!
Posted by Alea at 6:32 PM 1 comment:

End of the Summer Moviewatching

Sin City- third viewing, love the movie, it could be Kill Bill 3 in my opinion, wish there were more special features

The Perfect Score- some what better than I thought, it's filled with young stars that are making it big as we speak. But at the same time very predictable.

Miss Congeniality 2- similar to the first good for a laugh, rented in Colorado.

Because of winn dixie- nicely made sappy children's movie, but then again it was a book, rented in Colorado.

Fat Albert- rented by my sister, it was ok, sort of stupid, I don't recall how it did in the box office. Guest appearances but Aaron Carter and Joel from Good Charlotte, i bet that sold a lot of tickets.

Bride and Prejudice- from the director of Bend it Like Beckham, Bollywood meets Hollywood, a semi-musical that travels from India to England to LA and back again, has some hilarious characters.

The Upside of Anger- I was surprised to find out the gross radio producer in the movie was the writer and director! He is very talented. Had hilarious moments and sad moments, I felt like I didn't really get to know the daughters and felt like their stories were left unfinished.

The Brother's Grimm- in the tradition to ensemble cast action adventures like The League of Extraordinary Gentlemen, it had funny times and really cheesy times. It was ok though.

Constantine- much better than I thought it would be. Keanu Reeves was pretty good, enjoyed seeing the good and evil reveal themselves, I liked it

I Capture the Castle- nice, funny movie. Still have to finish the book, I was disappointed by the ending, I didn't want to be but I was, I felt bad for the girl.

Shaun of the Dead- hilarious zombie movie, the beginning is great and has some really cool shots but by the time the zombie war in going on full force it got pretty boring.

Dogville- it was a play on film, was about 3 hours long. Strange set and Grace's reason for running away was strange, weird ending.

Analyze That- less annoying than the first movie, but in the same tradition, it was ok.

The Big Chill- reminds me of St Elmo's fire but maybe 7 years later. Glenn Close and Kevin Klein and Jeff Goldblum in their younger years, I would suggest it!
Posted by Alea at 4:54 PM No comments:

End of the Summer Reading

Blink- newer book by the author of the Tipping Point, both were very good but I think I enjoyed Tipping Point a bit more. Read both and tell me what you think.

The True and Outstanding Adventures of the Hunt Sisters- written in the form of letters and emails, sad story of two sister's one trying to make it in hollywood and the other going through cancer, fast read, it was ok.

The Idiot Girl's Action Adventure Club- hilarious set of short articles in the book form from a 20 something's life. It's hilarious non-fiction. I loved the stories about her neighbors, two little girls that would come over to bug her all the time.

The Namesake- great story about an Indian family moving to the US and their American born children.
Posted by Alea at 4:47 PM No comments:

End of the Summer

Going to Colorado tomorrow for a week and then a few days later back to school. So talk to you all later. Enjoy your end of the summer!
Posted by Alea at 11:04 AM No comments:

Motion City Soundtrack was on Conan tonight, good for them! Let this serve as a reminder of their awesomeness.
Posted by Alea at 12:41 AM No comments:

Today Sin City came out on dvd. To me it could be considered Kill Bill Vol. III! If you haven't seen it you should. But if you have a weak stomach for graphic (comic) violence make sure to have your hand ready to put over your face.
Posted by Alea at 2:01 PM No comments:

Lucia, Lucia- enjoyed it much more than I thought I would. Set in the 1950s New York an young Italian girl and the most memorable year of her life.

Harry Potter and the Half Blood Prince- ooohhhh. So good. I read that thing like there was no tomorrow.

Me Talk Pretty One Day- hilarious, hilarious, thanks so much for the suggestion, you guys know who you are!

Nickel and Dimed- read it in a day in preparation for the Freshman Into the Book Seminar that I am helping with. It was depressing in a sense but also really informative at times even funny.

Thumbsucker- saw the trailer for the upcoming movie and then found out it was a book, set in Minnesota none the less. About a teenage boys addiction to thumbsucking, when it is stopped by his dentist he turns to a variety of other sources of fulfillment.

Spongebob Squarepants movie- my favorite part was when someone (some fish) yells out "You're a knucklehead mcspazatron", that was hilarious and when Spongebob and Patrick ice cream it up until they are "drunk". Besides that it was like the show, funny and then really annoying.

Thirteen- freaky, at times I would have liked some narration... it was a messed up movie.

Ella Enchanted- in the sense of Disney cute, the songs were not necessary, that was too cheesy, the Princess Diaries is much better

Vanity Fair- very long, spans several decades in Becky's life, some of the sets were really beautiful and some of the characters were great, didn't much care for the one we were supposed to care for though, the main character, but I guess it was trying to stay true to the book, same director as Monsoon Wedding, I'd suggest that

Elf- probably the 3rd or 4th time I've seen it, Will Ferrell is great, it's for children and adults alike, much better than Kicking and Screaming, plus it's main setting is NYC!

A Very Long Engagement- I've been dying to see this and it was really wonderful. Aesthetically it matches Amelie, the behind the scenes feature was really good as well. I would suggest it!

Envy- it was just as bad as I heard it was. Sort of pointless, funny at times but really stupid.

Get Shorty- I felt like I had seen this before, maybe on tv. Now I'm excited to see Be Cool.

Being Julia- I didn't really care for it, I don't see why it was nominated for great acting. It was a bunch of drama and complaining.

Talk to Her- really strange, it's about two men that meet at a hospital, one a caregiver and another the boyfriend, both of women that were in comas. It's Spanish, I guess I would suggest it if you are up for something out of the ordinary and sort of creepy.
Posted by Alea at 10:51 PM No comments: 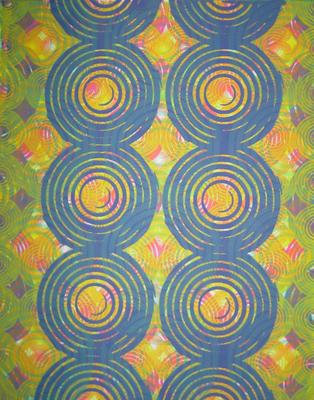 My 4th print, for the class project "Obsession". It has 6 pulls (layers) and is a full bleed print meaning when I printed it I printed right off the page. I made 26 of them because the people in the class that are participating are trading with everyone else that participated. So that's kind of fun, I'll have a collection of around 16 prints by other people. (This is actually not the exact version of the edition, its the same but this one has more yellow.) 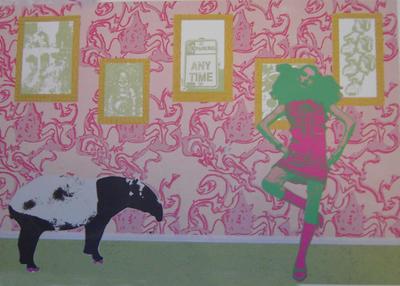 Isadora and her pet tapir Crystal

This is probably my wildest print. It have 21 pulls so it was time consuming. To say the least its interesting. Basically its a wild rich lady with her exotic pet. 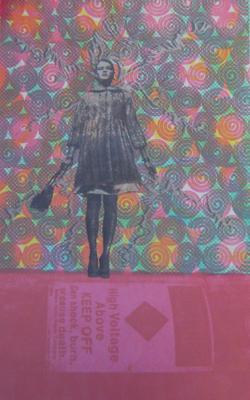 I've shown this already, but you can see at the bottom a hint of a gloss layer that reads "Danger". It was 10 pulls. 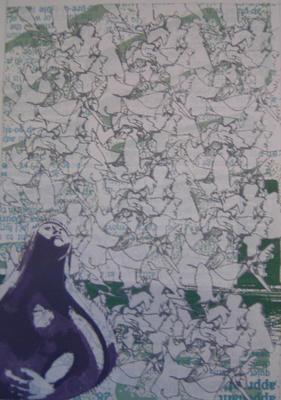