A Word on Younger Women's Magazines 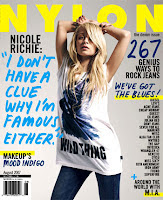 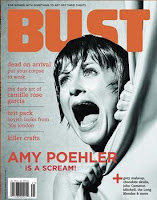 With the almost confirmed rumor that Jane magazine has folded, i've been thinking about the state of younger women's magazines. I had just recently begun reading Jane magazine and was very much enjoying it. I had not realized that according to most it was going downhill. So what are we left with in my opinion? Nylon magazine which is continually putting tabloid celebrities on their covers in between the rare more interesting cover stories. I find it strange that month after month they publish readers letters protesting that they do away with the celebrities we hear about everyday and go for someone else (Zooey Deschanel for example) Kinda funny she's on the cover of the last issue of Jane. What I like even more than Nylon is Bust magazine. Love their cover stories and range of articles. The only problem is it only comes out once every two months and is very very small. So I subscribed to Nylon to try and supplement the in between time. When I originally subscribed to Nylon they were featuring people such as Kirsten Dunst and Amber Tamblyn. Wish they would bring that back! So yes, any of you magazine readers out there. Comments, thoughts, suggestions?
Posted by Alea at 12:57 PM