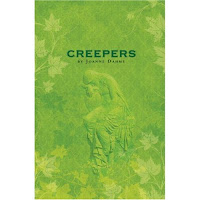 13 year old Courtney has just moved to town with her parents, the first thing she notices about her new house is the abundance of ivy covering it, (no matter how much ivy her father removes it just comes right back) also the cemetery next door. In the cemetery Courtney meets Margaret Geyer and her father Christian, they give tours of the cemetery. Soon they share a secret with Courtney, they have relative, Prudence, that is supposed to be resting in the cemetery but they know her body is not there.

Prudence and her father, also Christian once lived in Courtney's house. When young Prudence died her father was beside himself and allowed a witch to try and help him bring Prudence back to life. But where is Prudence? And is the Ivy trying to tell Courtney something? This is the story of Courtney and the Geyer's quest to find Prudence and reunite her with her father, even in death.

This is a sweet little mysterious story, a great summer or fall read for junior high aged kids. Courtney senses something different about Margaret and Christian Geyer but can't quite put her finger on it, I think readers will have a fun time guessing just what is up with these two characters. I'll tell you this, I guessed wrong! I found the ending a little too vague for my own tastes. And not all my questions were totally answered. But who knows, maybe that was the point. Not everything always has to be wrapped up neatly.

Each chapter is started with a news clipping, or other piece of information that helps piece the puzzle together. There are also several images throughout the book and pages of the 1st Christian Geyer's diary. I really liked that aspect of the books design, it created a world for this story to take place within. To compliment the abundance of ivy (a character itself) in the book there is ivy growing on the pages of the book! Very smart book design!