What I'm Watching This Fall Season or I Swear I Find Time to Read Too! 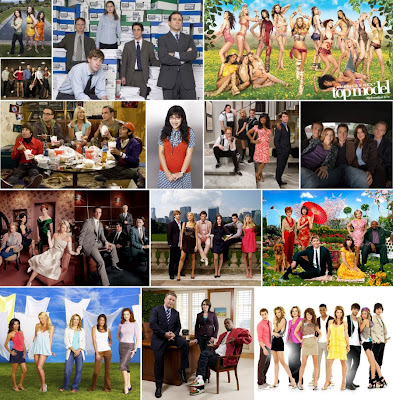 So yesterday, I had to squeal with joy over The Office. When in fact there are a lot of fall shows, new and returning that I enjoy/look forward to. Some of them haven't even started yet! When I named this blog Pop Culture Junkie I wasn't kidding! Every fall I carefully consult the Entertainment Weekly, Fall TV Preview Double Issue to map out my tv watching!
Let's see what we got here:
Privileged (CW-Tuesdays-Season One) is a brand new show about a semi-recent college graduate that gets a job tutoring two not so into school teenage sisters. You'll recognize the star from the tv show Reba! I love that she wears Rocket Dogs!
One Tree Hill (CW-Mondays-Season Six) picked up right where the last season ended, several years in the future still. It's about a group of friends that went to high school together. I think I missed about a season and a half somewhere around Season Four so I need to go back and see what I missed.
The Office (NBC-Thursdays-Season Five) also pretty much picks up where it left off last season. Pam's going away to art school (squeal). I loved the new friend character at school with her, he's from Mad Men (and The Devil Wears Prada). I got into The Office oh man maybe last summer or fall. Originally I watched the first episode or two and didn't get the humor. But once I got hooked onto it this time around I couldn't stop watching it. I guess my taste in humor has changed a lot! I've seen a season of the original Office and it's just as funny.
America's Next Top Model (CW-Wednesdays- Cycle Eleven) Cycle Eleven already! I guess they move fast with two seasons a year. I've been watching this show since the beginning and my favorite part is the photo shoots. I have a minor in Photography so I'm all about the interesting set ups and compositions.
The Big Bang Theory (CBS-Mondays-Season Two) is a show about two nerds that live across the hall from a beautiful girl. One of the nerds has a huge crush on their neighbor.  I love the geek, nerd, dork humor!
Ugly Betty (ABC-Thursdays-Season Three) picks up in the fall (the season ended at the beginning of summer) So happy for DVRs, I was able to catch up and by winter of the first season was watching with everyone else. Looks like Betty is in for a lot of changes this year!
Do Not Disturb (FOX-Wednesdays-Season One) takes place in a hotel. I just love the idea of something taking place in a certain work location (The Office). I read something tonight saying it might be cancelled but I guess it is being denied currently. I guess we will see. I love shows like this that collect people from other hilarious short lived shows and bring them together!
How I Met Your Mother (CBS-Mondays-Season Four) is literally the story Ted, the main character, is telling his kids of how he met their mother. But really it's a show about a group of friends.  I started watching this show midway through Season 2 out of laziness, I had just graduated from college and didn't feel like doing anything so I watched tons of tv. This past spring I shot through all the episodes so I was up to date. This show is hilarious, makes me look forward to Mondays!
Mad Men (AMC-Sundays-Season Two) takes place in the advertising world of Manhattan in the early 1960s. The second season actually started in the summer so it's probably half way through already. I've been collecting this on my DVR and watching it in little spurts. I finished watching Season One on dvd the day before Season 2 premiered!
Gossip Girl (CW-Mondays-Season Two) is based on the popular teen book series by the same name. Because it was based on a book I've been watching this from the beginning, it's pretty fun.
Pushing Daisies (ABC-Wednesdays-Season Two) is pretty much a fairy tale about a guy that can bring dead people back to life but only once and only for a very short period of time. After a very short first season because of the writer's strike I'm very excited for its return. It was my favorite new show last year!
Desperate Housewives (ABC-Sundays-Season Five) is the story of the residents of Wisteria Lane. I started watching this at the very beginning. Me and several friends in college would always get together to watch it. I love the mystery aspect of the show.
30 Rock (NBC-Thursdays-Season Three) takes place on the set of a show not unlike SNL, created by Tina Fey. I'm actually watching Season One right now on dvd and plan to be ready for the season premiere at the end of October. This is one of those shows I didn't start watching right away and didn't want to start in the middle of a season so now is my chance to catch up!
90210 (CW-Tuesdays-Season One) is a remake of the original. I never saw the original but I'm liking this new version so someday I may have to go back and watch the original.
There are other shows I know I'll catch on dvd like Chuck, Samantha Who, Private Practice etc but a girl can only watch so much during the actual season!
Now this doesn't even cover my favorite shows of all time. A lot of my favorite shows have either ended or been cancelled in the past several years... that's a whole different post! As you can tell I like tv!
So do you watch any of these shows? What show am I missing that I should be watching? Do you buy your favorite tv shows on DVD? Do you use a DVR recorder?
Posted by Alea at 8:32 PM