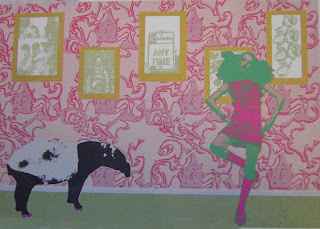 Mrs. V tagged me to share 7 random things you probably don't know about me!
1. My favorite animal is the tapir. I actually like tapirs so much I've done at least two projects in college involving them. Including the screen print shown, entitled "Isadora and her pet tapir Crystal"
2. I'm left handed.
3. I have some crazy laughs. Some are really loud and one of them actually sounds like a quack according to some people. I've had friends try and coax it out of be before!
4. More than a year ago me and several friends created a zine called "Ink Engine". We made 100 copies and sold it at a zine fest. Wish we could get organized and do issue two! They are also being sold in a few local stores, yay for pushiness!
5. I'm about as obsessed with dvds as I am with books. Which pretty much reveals that yes I am a packrat!
6. I have a degree in graphic design and a minor in photography.
7. I love those little sponges that start out as pill shaped and dissolve into little sponges! Ok that was really random!!!!
I'm going to tag: Hope's Bookshelf, Shooting Stars Mag, S. Krishna's Books, Reviewer X, and Diary of An Eccentric.
Everyone else feel free to play along too!!!
Posted by Alea at 2:56 PM