My Husband's Sweethearts by Bridget Asher 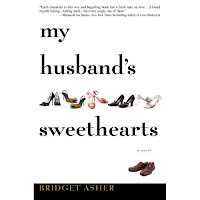 From the dust jacket:
When Lucy discovered that her charming, cheating husband was dying, she came home, opened up his little black book, and decided she wasn’t going through this alone. After all, Artie’s sweethearts were there for the good times—is it fair that Lucy should have to manage the hard times herself? In this wise, wickedly funny new novel, Lucy dials up the women in Artie’s black book and invites them for one last visit. The last thing she expects is that any will actually show up.

But one by one, they do show up: The one who hates him. The one who owes her life to him. The one he turned into a lesbian, and the one he taught to dance. And among them is a visitor with the strangest story of all: the young man who may or may not be Artie’s long-lost son.

For Lucy, the jaw-dropping procession of women is an education in the man she can’t forgive and couldn’t leave. And as the women find themselves sharing secrets and sharing tears, they start to discover kindred spirits—and even something that’s a lot like family. But Lucy knows one thing for certain: the biggest surprises are yet to come….

Full of heart, Bridget Asher’s unforgettable novel is about mothers and daughters, fathers and sons, and the deep friendships between women. It’s about sweet liars and tenderhearted cheaters—about loving those we love for reasons we can’t always fully rationalize, and about the sort of forgiveness that can change someone’s entire life in the most unexpected and extraordinary ways.
This was a bittersweet story. Humorous yet sad. I think my favorite character was that of Artie's maybe son, John Bessom. I liked his interactions with Lucy, where they talked about Artie. As for the rest of the characters I wish I had gotten to know them better, I didn't feel like I knew that much about most of them besides one of the sweethearts, Elspa. Since the story is told from Lucy's perspective I found myself actually forgetting her name. I would have liked to see more interactions between Lucy and Artie and found out a little more about Artie. You could definitely sense his love for Lucy through the little notes he sent her while she was away on business/avoiding him. I just wanted to see it a bit more when they actually came face to face.
I really liked the idea of a revolving door of sweethearts and really liked the part where several of them were described including a mother and daughter! Again, would have loved to hear about more of them! I think it would have added to the humor of the book. I also liked the idea of women that could potentially be at each other's throats developing a friendship and helping each other grow and prepare for losing Artie.
I definitely knew how the book was going to end but that's the ending I was really hoping for so it was pretty darn satisfying! I hate endings that set you up and then go into a totally different direction! This was a sweet, rather light read!
3/5 Stars
Review copy provided by publisher
Posted by Alea at 6:00 AM