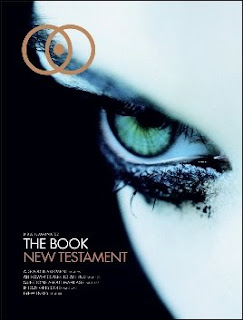 I have been given probably the most exciting opportunity, related to my blog, to review the upcoming book, Bible Illuminated. The book isn't actually being released until October 28th. But I've been allowed a sneak peek of the book for now, with a full review to come later on.
Having a background in design and photography this book is very very interesting to me. Instantly it reminds me of some of my favorite books including Matthew Barney's The Cremaster Cycle and Richard Avedon's Photographs 1947-1977. Books that give me the chills!
Bible Illuminated juxtaposes powerful editorial and fashion images with the text of the New Testament bringing it into a contemporary setting. The book is laid out like a magazine with different pieces of the text called out, highlighted, and used as captions.
I'm going to be upfront, I've never read the Bible but was instantly attracted to this approach. I think that this book can be a great tool to get people interested in reading the Bible, even if just to educate themselves to see what the Bible is all about, it's very easily approachable. This is a fantastic concept.
To put that better, this is the Illuminated World Mission (straight from their website):
Illuminated World seeks to introduce today’s audience to a revolutionary contemporary Bible, one that encourages dialogue and is culturally relevant, accessible and easily digestible for any reader regardless of religious, economic, racial or social background.