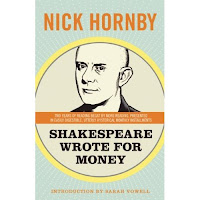 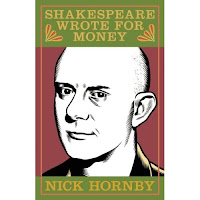 Shakespeare Wrote For Money by Nick Hornby
Product Description from Amazon.com:
With an affectionate introduction by Sarah Vowell, this is the third and final collection of columns by celebrated novelist Nick Hornby from The Believer magazine. Hornby's monthly reading diary is unlike any arts column in any other publication; it discusses cultural artifacts the way they actually exist in people's lives. Hornby is a voracious and unapologetic reader, and his notes on books — highbrow and otherwise — are always accessible and hilarious.

Released Dec. 1st 2008.
Earlier this year I read the first two books ( The Polysyllabic Spree and Housekeeping vs. the Dirt) from this collection and adored them. I sort of figured a new one would be coming out soon but am sad to hear that it will be the last! These are definitely great for bookaholics! He often times shares passages from several of the books he reads. It's great stuff!
So I got this post together a few weeks early and between then and now a new cover was posted on amazon. How funny is that! The blue, orange, and yellow cover is the one that's currently on amazon. So that would lead me to believe that's the real one.
What can't you wait for to be released?
"Waiting On" Wednesday is hosted by Jill at Breaking the Spine!
Posted by Alea at 6:00 AM