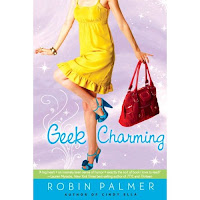 Geek Charming by Robin Palmer
Amazon.com Product Description:
Dylan Shoenfield is the princess of L.A.’s posh Castle Heights High. She has the coolest boyfriend, the most popular friends, and a brand-new “it” bag that everyone covets. But when she accidentally tosses her bag into a fountain, this princess comes face-to-face with her own personal frog: selfprofessed film geek Josh Rosen. In return for rescuing Dylan’s bag, Josh convinces Dylan to let him film her for his documentary on high school popularity. Reluctantly, Dylan lets F-list Josh into her A-list world, and is shocked to realize that sometimes nerds can be pretty cool. But when Dylan’s so-called prince charming of a boyfriend dumps her flat, her life—and her social status— comes to a crashing halt. Can Dylan—with Josh’s help—pull the pieces together to create her own happily-ever-after?
Released on February 5th 2009.
Geek alert? Film geek alert? Yes, could me in! I can't wait to see Josh win over Dylan's heart and spout some great film references in the process! Yay!
What are you waiting on to be released?
"Waiting On" Wednesday is hosted by Jill at Breaking the Spine!
Posted by Alea at 6:00 AM