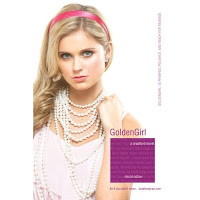 Paige, Spencer, and Madison have it all: the looks, the connections, the money, the boys. As the daughters of three of the most prestigious families on Philadelphia's Main Line (read: old money, and lots of it) and the ruling juniors at Bradford Prep, nothing can stand in their way....except, perhaps, their own dark secrets. When an old frenemy from Paige's hidden past shows up at Bradford and plays nice--too nice--Paige is desperate to smother the threat. How far will she go to silence the truth?

This was a gossipy, scandalous, fashionably good time! I really liked reading the thoughts of Spencer via her blog posts, especially the little love triangle that she has gotten herself into. Because most of the blog posts are from her point of view (in this book) I felt I got to know her the best of all the characters. It was also really nice hearing from some of the other characters on the school blog, The Bradford Blog, I hope to get to know them just as well in future books.

What initially attracted me to this book was how it's working on multiple platforms, we have the book, which is essentially a collection of blog posts and a few emails and then probably a good dozen or so websites, from myspace profiles, to twitter pages, a Bradford Prep official website, and websites for other locations in the book. I loved the idea of being able to poke around online and get to know the characters better.

I think most of the fashion and label references got lost on me since I don't know much about fashion, so I wouldn't have minded a few less, but I'm sure there are people out there that love them! Also, I don't know if this is showing my age or what but some of the acronyms I had to look up. A little glossary of terms in the back of the book would have been very helpful to someone like me!

I'm definitely looking forward to where the second book, Fashionista picks up! There is somewhat of a mystery brewing and I really want to know the truth!

GoldenGirl is released on January 27th.

Have you ever read a book that uses a lot of blog posts? I'd love to hear about it!
Posted by Alea at 6:12 PM