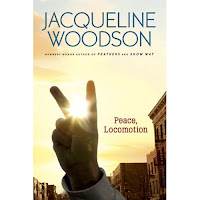 Twelve-year-old Lonnie is finally feeling at home with his foster family. But because he’s living apart from his little sister, Lili, he decides it’s his job to be the “rememberer”—and write down everything that happens while they’re growing up. Lonnie’s musings are bittersweet; he’s happy that he and Lili have new families, but though his new family brings him joy, it also brings new worries. With a foster brother in the army, concepts like Peace have new meaning for Lonnie. Told through letters from Lonnie to Lili, this thought provoking companion to Jacqueline Woodson’s National Book Award finalist Locomotion tackles important issues in captivating, lyrical language. Lonnie’s reflections on family, loss, love and peace will strike a note with readers of all ages.

Peace, Locomotion is a hopefully book that speaks of the different definitions of family. Biological family, foster family, and your country. I believe the book is set around current issues but really it's relevant for any time period. I hadn't realized when I started reading, that this is a companion book to the book, Locomotion, but I felt it had to power to stand alone just fine.

The book is a series of letters that Lonnie Collins Motion aka Locomotion writes to his little sister Lili. After losing their parents in a fire they are put into separate foster homes and don't get to see each other as often as they would like it. In his letters Lonnie tells his sister all about his life, his classes, his poetry, his friends and also his foster family who has a son in the war.

I thought this was a sweet book that deals with some heavy issues in a very hopeful way. It made me smile but also made me a little teary eyed. The character of Lonnie is wise beyond his years and his love for his sister and foster family is touching. It's inspiring to see what a good person he remains after having to deal with so much at a very young age. The author has captured his voice perfectly.