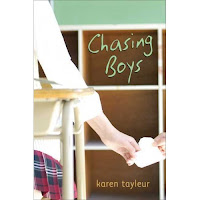 An insightful coming-of-age novel for girls with no interest in being “Pretty in Pink”. El Marini just isn’t fitting into the new life she’s been forced to create without her dad. Her mom and sister have accepted his absence and moved on, but El is convinced things will get back to normal if she just keeps her feelings of loss to herself and waits it out. Life at her new public school would have been unbearable if weren’t for Eric Callahan. As her crush grows to epic proportions, she’ll do anything to be more like the popular girls he notices, even buying the first pink top she’s ever owned. But then she meets Dylan, a quiet artistic-type who is both unnerving and annoying as he shines a light on El’s misguided attempts to attract Eric. El’s need for acceptance will hit home with teens as she finally sees that chasing boys has distracted her from making peace with the past and finding herself.

I have mixed feelings about this book, there were some things that worked and others that just didn't. In the end the book let me scratching my head a bit but there are still some good things going on here.

For the most part I liked the characters in this book, particularly artistic type Dylan. I would swoon for that boy in a second. I loved all the scenes he and El were together. For the most part I liked the main character El but it got to the point where she was a bit too obsessed with Eric, who she's had a crush on forever and it starts to get rather annoying. I liked the basic set-up, girl trying to get through high school but it just never fully played out in my opinion.

The book could be pretty funny yet sad at times, I especially enjoyed El's sessions with her therapist Leonard, where she wouldn't say anything the whole time for the most part. Also, this book is written in short chapters so it makes it very easy to get through, I really liked that.

I think what really bothered me about the book was the ending, it was very loosely wrapped up and then had this strange twist at the end, which basically contradicted something the author had previously stated, basically she pulled a fast one. While it did make sense, it was just sort of out of nowhere.

All in all an ok enough book but it didn't really have enough resolution for me.

2.5/5 Stars
Review copy received from publisher
Posted by Alea at 6:00 AM