Deep in the Heart of High School by Veronica Goldbach 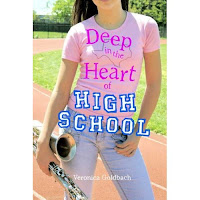 Vanna Reynolds was popular and happy back in Plano, Texas, but now she lives with her mother in a tiny apartment in San Antonio. How can she start her freshman year as a complete nobody? Fatima Garcia does well in school and helps out with her family’s construction business, but is worried about her weight. So she’s thrilled when a junior starts paying attention to her – but is he really interested in Fatima? Olivia Silverstein tries to make life easier for her mother. Ever since her father died two years ago, she’s been the perfect daughter. When will she get to have her own life? When Vanna, Fatima, and Olivia meet at band practice in August, they quickly become best friends. Together, they are ready to tackle the matters of the heart that await them, deep in the heart of high school.Written with verve and touches of humor, the voices in this first novel ring with authenticity.

Deep in the Heart of High School is a classic novel of the coming of age of three friends. They each face their own set of problems individually but help each other become strong enough to face these challenges. Anyone that is a fan of Ann Brashares's The Sisterhood of the Traveling Pants series of 3 Willows, this book is for you.

I loved how heritage played a part in this story, all of the girls having different backgrounds but also sharing some things in common. It was also interesting to read about Texas, a place I've never been before. It sure makes me want to visit!

I think my favorite character was Fatima. She had a rather large family, but her older sister is somewhat estranged from them. Also, she's a bit on the chubby side with her mother constantly trying to help her lose weight, and also her friend Alex, who's she's been friends with forever but it feels like he's starting to see her in a different way. While I favored Fatima, I thought all the characters were well rounded and interesting.

I loved the band aspect of this book, that's what drew me to it originally. In the beginning of the book the band "food chain" is described and I found it hilarious, because apparently at their school I would have been one of the cool kids (the drummers).

All in all this is a sweet coming of age book perfect for YA readers of any age!

Deep in the Heart of High School is released on April 27th.

3.5/5 Stars
Review copy received from publisher
Posted by Alea at 6:00 AM