Check out the rest of the Dull Boy tour stops here!

Sarah Cross is a Taurus born in the year of the Monkey. She is four inches taller than Wolverine, but does not have adamantium claws ... yet. Fierce but cute Pallas' cats are her favorite animals--and if you don't think that is relevant, then you really don't know her. She grew up in Ohio and now lives in New York. DULL BOY is her first novel. 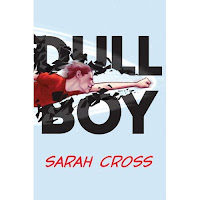 What do you do if you can deadlift a car, and you spend your nights flying to get away from it all? If you’re fifteen-year-old Avery Pirzwick, you keep that information to yourself. When you’re a former jock turned freak, you can’t afford to let the secret slip. But then Avery makes some friends who are as extraordinary as he is. He realizes they’re more than just freaks—together, maybe they have a chance to be heroes. First, though, they have to decide whether to trust the mysterious Cherchette, a powerful would be mentor whose remarkable generosity may come at a terrible price.

Dull Boy was awesome, hilarious and pretty geektastic! I really liked the main character Avery, I usually prefer books in a female voice just because it's easier for me to relate to, but Avery was just a cool guy with a good heart. I really liked him, and he was pretty funny! I really liked the abbreviated swear words he used or thought, stuff like "What the F". That kind of stuff is just perfect to me!

And of course Avery isn't the only character. I loved all his new friends from Darla the super brain that has all sorts of crazy gadgets and a giant robot(!) to Nicholas the tortured boy with a power he can't control to Sophie who always seemed to be in a good mood and Catherine who is also hiding a secret... they all had something to offer to the story!

I never decided in my mind if Cherchette (crazy awesome name) the mysterious lady with powers of her own would end up to be good or bad and just let the story unfold in front of me. I really liked what I learned about her and from her, she informs us of about some background of where the kids got their powers that some authors might leave out but I'm so glad that Cross included, I'm all about the details!

Another thing I really liked was that throughout the book there are case files about each of the kids and their powers. I liked having that to refer to instead of just knowing what the story told us. All in all a fun and action packed book that seems to definitely set itself up for a sequel, can't wait to see what happens next!

Dull Boy was released on May 14th.

And here's an interview with Sarah Cross!

1. If you were a superhero what would your power be? What would your costume look like?
If I were a superhero, I'd want to be a triple threat: adamantium claws, a healing factor, and a psychic link with falcons. (Hey, why settle, right?) My costume would be Samus's bright blue zero suit from Metroid, which I would keep wearing until I got a cease & desist letter from Nintendo. It's just the right blend of simple and omg-are-you-srsly-wearing-a-sky-blue-catsuit obnoxious. Click for a pic.
If I were a villain, though, I'd be a shapeshifter. And then I could change my costume every day.
2. Would you rather have a super power and have to hide it or truly be dull and without a power?
I would definitely prefer to have a superpower! Being forced to hide it wouldn't be a problem for me. I like keeping secrets.
3. It sounds like you have a background in 'zines (go 'zines!) care to elaborate on what they were about?
Only if you promise not to make fun of me! LOL, okay, actually, I am fair game. Bring it on. ;)
I had a habit of making magazines when I was bored, but my 'zine magnum opus was called Small Fat Walrus Taxi. Its raison d'être was randomness, and the mascot was a small walrus who had a complex about his lack of girth. There were articles like "How to be a dude," wherein Dude Sarah (me wearing a hat and my boyfriend's jacket) gave ridiculous advice; an interview with my Mozart-loving grandfather called "Why Yanni Sucks," which my grandfather totally derailed when he changed his opinion midway through & decided Yanni was okay; and an interview with a real live author, back when very few authors had websites and you had to accost them in person. I was so nervous I think I asked 2 hours' worth of questions. Oops.
There were also little marker drawings of a walrus shooting a bow & arrow, wearing a negligee, etc.
4. What's the best comic/graphic novel that you recently read?
Wolverine First Class (written by Fred Van Lente) is awesome. It features the grouchy little scrapper version of Wolverine that I love--he is not angsty AT ALL!--and it's hilarious to watch him try to mentor Kitty Pryde. I highly recommend it.
I'm also really looking forward to Brian Azzarello's upcoming noir graphic novel, Filthy Rich.
5. According to your FAQ, you listen to music while you write. What song is currently playing on repeat right now?
Right now I'm addicted to "Good Girls Go Bad" (feat. Leighton Meester) by Cobra Starship. Current play count: 128. You can listen @ my Vox.
Thanks, Alea!
Posted by Alea at 6:00 AM