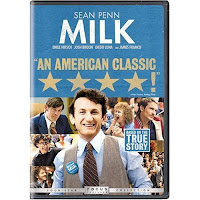 This is an important movie. I feel like everyone should see this now. Unfortunately I didn't know much about Harvey Milk before seeing this movie but wow, what an important and beautiful person he was! And what a tragic way for his life to end. I will admit it, the ending made me cry.

For some reason it took me a bit to get into the movie but once I was into it I was INTO it. Movies are always wonderful to watch but when they are based on real people they become something else. I guess in some ways they almost become more important? I don't know.

I guess I don't really have much to say besides this movie touched me. And it was really interesting to learn some of the history of the gay rights movement.