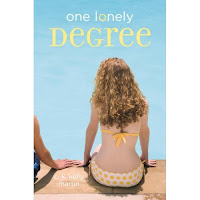 Finn has always felt out of place, but suddenly her world is unraveling. It started with The Party. And Adam Porter. And the night in September that changed everything. The only person who knows about that night is Audrey—Finn’s best friend, her witness to everything, and the one person Finn trusts implicitly. So when Finn’s childhood friend Jersy moves back to town—reckless, beautiful Jersy, all lips and eyes and hair so soft you’d want to dip your fingers into it if you weren’t careful—Finn gives her blessing for Audrey to date him. How could she possibly say no to Audrey? With Audrey gone for the summer, though, Finn finds herself spending more and more time with Jersy, and for the first time in her life, something feels right. But Finn can’t be the girl who does this to her best friend . . . can she?

This is the first book I've read by C.K. Kelly Martin, I know for shame, I need to read I Know It's Over. I really liked the idea of this book but it played out a bit differently than I would have hoped. Don't get me wrong, I really enjoyed it and I loved Finn. I mean she wanted to be a graphic designer and move to London or New York, we basically had the same dream!

One thing I was really interested in finding out was what happened at The Party, and I was surprised to find out how soon that information was given out. I figured I would have to wait a lot longer than I did. But at the same time it was kind of nice to know what the incident was because it allowed me to understand why Finn was the way she was without having to do that after I had finished the book, I got to do it during the book.

The parts I enjoyed most of the book were after school had let out and Finn's friend and Jersy's girlfriend Audrey was out of the picture. I really wanted to see how this relationship would develop between Finn and Jersy. How could it happen in such a way that Finn would be horrified with herself when she finally realized what was going on between herself and Jersy. I thought it was pretty believable. Sidenote: these characters have the coolest names! Anyhow, I really liked these parts but the ending left me wanting more. I'm not really certain how it ended, this was a case were I wanted a more concrete ending, I was having trouble imagining for myself where this would go.

All in all an interesting book and I can't wait to read the author's other title, I Know It's Over!

One Lonely Degree will be released on May 26th.

3.5/5 Stars
Review copy provided by publisher
Posted by Alea at 6:00 AM